Distribute and discuss mods that are functional.
Post Reply
21 posts

Hailing from a future more distant than any other Squad, these Mechs bend time and space in combat. 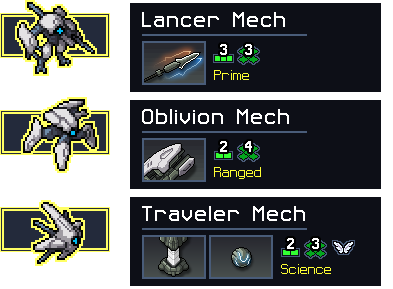 Lancer Mech
Rift lance: Damage and push an adjacent tile. Mech can teleport up to 2 tiles first by damaging itself. (1 damage. Each tile teleported deals Mech 1 damage.)
- 1 core: Reduces the damage the Mech takes when using this weapon by 1.
- 3 cores: Increases damage by 2.

Traveler Mech
Chronostasis: Push a tile and cancel enemy attacks. (Range upgrades allow it to target through obstacles.)
- 1 core: Extends range by 1 tile.
- 2 cores: Extends range by 1 tile.
Temporal Tear: Open a rift that time-travels past enemies to the present for the rest of the turn. Damaging past units damages their present selves. (Affects all tiles.)
- 2 cores: Mech can attack again after opening a Tear.
- 2 cores: Restores Mechs to the health they had at the end of the last player turn.


Some notes on past units:
- When targeting the Tear, blue glows show the location where enemies were last turn. Mousing over those spots will show the corresponding unit in the present.
- Past units have a faint blue glow and a custom trait. Selecting them will make their present self glow orange. Damaging them will change the HP of their present self (it won't count as damage). They arrive with whatever HP they had last turn.
- Past units fade just before Vek emerge, so they can block queued Vek attacks but not spawns.
- Past units don't grant pilot XP and are not affected by Psions (code-wise, they are Minor units). Past Psions do still provide a buff to present units, and armor from Psions reduces damage transmitted from their past selves.

Download modpack version of all my mods - requires mod loader 2.6.1 or later to function.
Mod Loader - originally made by Cyberboy2000 and continued by kartoFlane.

v0.06 (modpack v0.07 and later)
- Burrowing units can be summoned from the past.
- Damage to past units now transfers to their present selves as an HP change (rather than another instance of damage that can be affected by armor/A.C.I.D). That means it will no longer trigger tiles (ice/forest/sand) the present unit is standing on. Killing blows do still damage their tile.
- Updated to use the newer trait library.

v0.05 (modpack v0.02 and later)
- Fixed Achievement secret rewards and made them forward compatible with hopeful future modloader updates.
- Going forward, I'll only upload mods in modpack form; if you don't want all my mods, it's easy to extract only the ones you want and delete the rest, or disable them.

I also just updated my other 6 squads to use KnightMiner's palette library. You only need one mod with the library enabled to get the palette functionality, but this also cleans up the palette names for each of them. Zero Dawn also got a minor fix for its secret reward (an animation had stopped playing properly).
Top

This squad plays on vanilla ITB themes but brings a surprising depth. It's a well rounded team, I particularly like that the weapons do complement each other very well but do NOT depend on one another to function: very good integration in the weapons shop and in custom squads.

In particular:
- Rift Spear strikes me as an unassuming but brilliant gem design by squeezing so many tactical options in such a small and elegant package. It really highlights the futuristic and high tech idea of the squad.
- Temporal Tear is really unique and quite solid. Another home run on the squad's theme. Looks fairly balanced as far as I can tell, rarely being the default option but when it becomes relevant it can bring a real wow moment. I really appreciate the polish on user experience and information clarity for this weapon.
Top

Appreciate the kind words!
And thanks for the videos narD

Very fun cascading effects. Drench both an enemy and its past reflection in A.C.I.D. and you can deal very impressive damage to it.
With Bots'n'Bugs:
- Armored Roaches are rather resilient to Temporal Tear shenanigans, as their armor efficiently cuts down rippling damage.
- You can fire Temporal Tear when there are Alpha Swarmers around, if you want to enjoy absurd numbers of Alpha Swarmers.

Armor does make for some inconsistency headaches. I thought about making damage transfer through armor, but the psions bork that up slightly by not giving minor units armor (which past units are).

So yeah Roaches unfortunately double-dip. Maybe I'll eventually try to get armor a bit more consistent, but not sure how.

That reminds me; I apparently hard-coded the Tear to ignore stable enemies, but now that friendlies don't time-travel I can't think of much reason for that. I'll do a bit of testing and hopefully update the mod soon.
EDIT: Turns out Burrowers have a lot of issues that would require more substantial changes, so for the time being they'll continue to be immune to the Tear. I did update the mod to allow stable, non-burrowing enemies to be tracked (for use with ItW, although such enemies will rarely be summoned).
Top

The Mechs are so cool! It was fun playing with this Squad! They don't seem too OP, but it was a bit difficult to decide were to divert power. But I finished the game with minimal damage. Thank you for the mod!

I had a bug occur on the final island mission where the past version of an enemy got crushed by a rock (environment damage) and so the present version dies but then the game immediately crashes. I tried ending the turn again a few times but it kept crashing. (I did have a bunch of other mods installed but don't know nearly enough about mods to know if there was some conflict or something.)
Very fun squad otherwise! The time travel mechanic can be very tricky to use but it is awesome when you manage to do something cool with it.
Top

Thanks for the report! I'll see if I can easily replicate it, although other mods do always leave a bit of a question mark. If it was recent, did you see anything in error.txt after the crash?

UPDATE: I let a boulder kill a past enemy during turn 1 of the cave, and nothing crashed. I had all my own mods enabled, no others. So another mod may have been responsible, unless you have any additional insight into what the specific setup was before the crash.
Top
Post Reply
21 posts