The Sires of War

"A squad of gargantuan mechs, built to solve problems via the application of brute force." 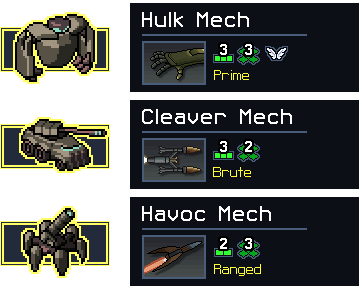 Hulk Mech
Grapplers Fist: Grab hold of a target, dealing 1 damage. If the target can be moved, the mech moves backward, pulling the target with it. As it is grappled, the targets move speed is reduced to 0 for their next turn.
- 2 cores: Generates a dust cloud around the grappled target.
- 3 cores: Increases damage to 4.

Cleaver Mech
Twin Lance: Fires a projectile that splits in half at the target tile, shooting down adjacent lines from that point. Each projectile deals 1 damage.
- 1 core: Increase damage to 2.
- 2 cores: The main projectile now pulls at the place where it splits, and the side projectiles push where they hit.

Havoc Mech
Maelstrom Rocket: Fires an artillery rocket that deals 1 damage and pushes the target in any of the four main directions, also pushing the mech in the opposite direction.
- 3 cores: Increase damage to 3.

0.1.2
Fixed the init file so that weapons will appear in the shop
Added custom rarity functions for the weapons
Fixed a glitch with burrowers queuing up attacks while still underground

I performed a showcase run of this squad for anyone who would like to see how they play before trying them out. A hard mode four island run starting with a level 0 Lily Reed as the first pilot.

There was an audio glitch (no sound was recorded), so I tried my hand at editing and added some music in. Also, in the second video, I experienced at least one glitch that will need patching. You'll know it when you see it.

I like the mechanism that moves after an attack. Particularly in the case of range, it reminds me of the pilot Chen Long's ability to choose where to move after an attack.
The only thing that makes me feel sad is that the movement of the brute is too short. I'd overcome this as a starting pilot, but I think it would have been a little better if it had been 3.
Top
Post Reply
3 posts • Page 1 of 1