Earth Shakers is a squad that relies on the terrain around it to defeat the vek, often transforming that terrain to suit its needs. This means that the map you fight on will have a greater impact than usual on how strong the squad is. 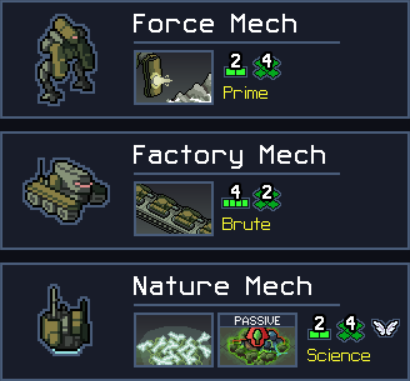 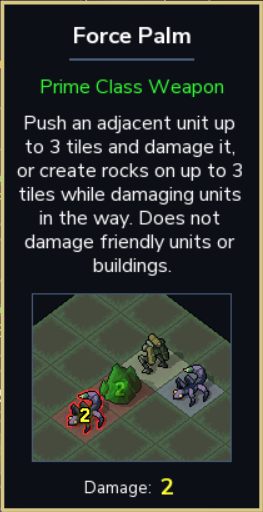 "Push an adjacent unit up to 3 tiles and damage it, or create rocks on up to 3 tiles while damaging units in the way. Does not damage friendly units or buildings." 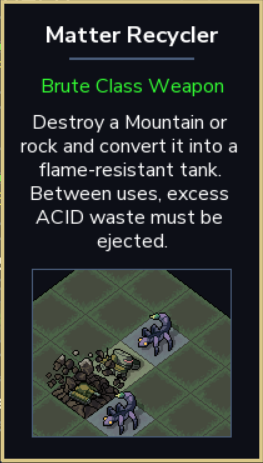 "Destroy a Mountain or rock and convert it into a flame-resistant tank. Between uses, excess ACID waste must be ejected."
Note that mountains, boulders created by ally mechs, and boulders created by diggers can all be converted into tanks.
NOTE: As of v1.1, the status of the Matter Recycler weapon will be saved when you quit the game; however, having multiple copies of the weapon is still not advised 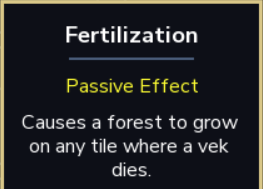 "Causes a forest to grow on any tile where a vek dies."
This is a passive weapon, so technically it can go on any mech.
Note that technically any pawn classified as an enemy will spawn forests, including bots and ACID vats. Also, when an enemy on a forest is damaged and dies, the forest created by the passive effect will overwrite the forest fire created by the previous forest being damaged. When an enemy with ACID dies, however, the ACID left behind will always overwrite the forest created on the tile where the enemy died.

Changelog
v1.1
- Fixed bug allowing you to move pawns through each other using the force palm
- Changed Matter Recycler to save its status in the save data
- Added icon for the modloader's squad management screen
v1.0 - Initial release
This mod should work with version 2.4.0 or older of kartoFlane's modloader.

For those who wish to try the squad out blind, you can stop reading now. For everyone else, I've made a small strategy guide for using the squad based on my playtesting on easy and normal.
First off, the order in which you beat islands matters much more with this squad than with most others. If you value your sanity, I recommended that you start with Pinnacle and Archive (in no particular order) because these islands have naturally spawning forests that are needed until you can power the mass growth upgrade. Once these islands have been beaten, if you do not feel prepared for the final mission you will probably want to beat Detritus, since the acid pools that occasionally spawn can be converted into forests at the start of a mission with the ACID upgrade. Nonetheless, this will be a significant increase in difficulty from the first two islands. After beating Detritus, you should have accumulated enough cores to be ready to fight the final mission, and so you will probably want to skip RST. RST is easily the hardest island because you have to rely on killing vek to get all of your forests. Of course, RST is not too difficult to handle if well-equipped, but at that point you are likely ready for the final mission anyways.
As for how to spend your cores, this squad has a few essential upgrades and some optional upgrades. Assuming you are clearing Archive and Pinnacle first, the best first upgrade to get is either +1 damage for the force palm or boosted energy for energize forests. With +1 damage, the force mech is fantastic and may even carry you through the first island; but if you are lucky with forest spawns, then boosted energy may be more useful. While the order in which you get upgrades does not matter that much during the first two islands, it is essential that you have both the aforementioned upgrades and the mass growth upgrade for the passive by the time you have beaten Archive and Pinnacle. This is a total of 6 cores, which should be easily doable if you get an average of 4 cores per island. Beyond that, the +1 damage for the factory mech’s tanks is a good upgrade to pick up. The ACID upgrade is mostly useful for taking on Detritus. The forest stun upgrade and the bonus movement/health upgrade for tanks are both situationally useful. The +1 range upgrade for the force palm seems powerful, but it loses much of its effectiveness in cramped areas where positioning is difficult, such as phase 1 of the final mission.
I haven’t tried out most of the vanilla pilots with this squad, so I cannot say which work the best. During my test runs, I almost always used Henry Kwan on the force mech as my starter since it makes positioning so much easier, so I would definitely recommend him.

Some miscellaneous tips:
- A secondary weapon on the botany mech (with the passive moved to another mech) is generally a good idea, but the other mechs really don’t need one.
- Any missions that require you to protect a hostile unit are difficult to handle with this squad due to the lack of non-damaging pushing capability. The forest stun upgrade is useful for nullifying threats without damaging them; just pray that they do not end up on a forest.
- If you insist on taking on RST, be aware that the earth mover has a tendency to remove forests for reasons that I cannot explain.
Last edited by RogueSquadron on Mon Mar 30, 2020 4:45 am, edited 1 time in total.
Top

The Force Palm has a really buggy interaction if you move a friendly unit on top of an enemy unit. You should probably update the GetTargetArea to prevent moving one unit on top of another. I uh, had a fun experience where instead of moving my Nature Mech, I moved an enemy Scorpion instead.

Overpowered and silly, but not what was intended I imagine!
Top

Thanks for the feedback. Unfortunately I cannot promise a patch any time soon due to college eating up my time.
Top
Post Reply
3 posts • Page 1 of 1