Distribute and discuss mods that are functional.
Post Reply
28 posts

Robert Scythe wrote:Ok, having a problem with the Manacasters. For some reason both the Dualcaster and Earth Mech's first attack on every mission freezes before applying the default effects, which is screwing up everything. This may also apply to the Frost Mech but since its attack is already a freeze effect it is redundant and I cannot see if it has been affected by this. I will test to see if it is due to Djinn's unofficial download for his sprites addition or not, but for now they feel unplayable to the degree of their weapon descriptions.

Edit: Well, this is happening with both the original download and Djinn's unofficial so I won't try to play them until it is fixed (hopefully). I know that Arfy mentioned that they may be a bit imbalanced but I wanted to try them anyway. Djinn's spritework is fitting but a bit goofy looking. I get the humour but it isn't that interesting for immersion.

Thanks again. Hoping to play these and any other creations soon!

The Freezing is intentional, in fact all of the squad's Mechs have a built in passive; I'd recommend completely removing the Time Warpers from your mods folder because I have had icon conflicts with them before.

Thank you for the kind words and for playing with my squads! I've got another set of 3 (set of 3 Mechs in squad, not 3 squads) coming soon.
Discord: ATOMiC#9226
Top

Hey, cool you checked the posts! Not sure how many modders are still working with this game. One simple thing I wanted to suggest, though you may not want to work on the old squads anymore, for the Fearstormers is to make the Fear Mech's weapon default the upgrade instead and have the default be that units are affected if ITSELF is in the surround zones. That way the other mech's abilities can come to light while still having the same effective idea that you started with. Could prove to be challenging and make them worth playing, plus it shouldn't take much to change it. I have a few suggestions for the Aquamarines as well but I will write them under their section. Thanks again and am looking forward to the new squad!
Top

I'm 2 islands in to a hard Time Warpers run. They're very thematic, cool, and feel on the high side of balanced. Enjoying them a lot, but have run into a number of bugs that I wanted to report:

Temporal Mech:
- Anchor upgrade that's supposed to allow 2 uses only gave me 1. The "sample window" showed 2, but the weapon icon and gameplay stayed at 1.
- I had an anchor "regenerate" its use early on; I think it might have happened when I did a turn reset?
- If you kill a marked enemy through normal means (and the anchor is still around), the purple star floats on the tile where they died.

Rift Mech:
- Tunneling sometimes doesn't move units backwards when I go through them. If there's a rhyme or reason to when it happens, I can't find it.

Balance-wise, I like Robert's suggestion of having Time Smash only stun for 1 turn. It doesn't feel like it needs to be longer. Also just in general, the temporal anchors are CRAZY good, since they move 1 enemy, relocate ANY enemy, and THEN leave a distraction target that the Vek will go after instead of buildings. On top of all that they can effectively remove all but 1 HP from anything. You could take away any 1 of those abilities and it would still be a sweet weapon. I think you could easily lose the "2 use" upgrade, and maybe just give them a fore/aft push, if you wanted to bring the squad down a little. I'll revise this comment if the rest of my run goes downhill

So after finishing the Time Warpers run:
- Still had a lot of fun. Think I would still recommend nerfing the anchors and (less important) the time smash.
- Really like Djinn's sprites for them, especially the way they flicker.

Specific anchor comments:
- I never invested in the upgrades (both were useless since I was killing anchors left and right to kill marked targets).
- I think the main reason they feel too powerful is their flexibility. They could use some restrictions, to fit with most other ranged mechs.
- I think the anchor teleport should function more like the portal mech, with a max range and possibly a lineup requirement.
- If you really want the anchors to target anywhere, I think they should not come online until the following turn (the push is plenty good in the meantime).
- I don't know if there's an easy way to keep Vek from targeting anchors, but if there is, it would probably be prudent. Otherwise they spend too many actions suiciding through the marks.

Next game was a 4-island hard run with the Atomics. Felt very balanced, and really cool!
- Pretty much as Robert said, the radiation felt like a very thinky version of fire.
- The fact that the squad can't damage anything unless they can irradiate it made mountain/dam/etc destruction a really weird puzzle. At first I thought it was frustrating, but they have such good pushing that it became a game of cleverly bumping units to destroy things. Once I got the hang of it was a fun challenge.
- Silica in the Fission mech is crazy. I aaaalmost think that attack is too flexible, since you can choose how far to travel...but I think it's probably fine.

While Djinn's sprites for them are slick, I did find myself wishing my prime mech looked more like...a mech, rather than a dump truck

Completed a 4-island Hard run with the Bloodweavers. Very nice job; they were a ton of fun to use. The early game was REALLY difficult, followed by a really powerful end game.

Some comments:
- I had a mech reactor pilot to start, so I never dealt with the welder setting myself on fire; I'm not clear how you'd survive that (I'm assuming you'd have to siphon back to life a lot more).
- I had to really adjust my early game and avoid a lot of objectives; the squad has trouble with "lose <4 HP" early on and they spend so much time keeping themselves alive that things like mountain destruction or killing enemies are very difficult to spend actions on.
- I managed to never lose a pilot, but it was often a close thing, especially with the siphon mech; I'd suicide it on the last turn, weld it back to life...and then remember that attacking again would suicide it again, so I'd have to repair instead.
- Once everyone had an HP upgrade, the squad really starts to click, because you're not constantly about to die.
- The projectile welder really helps too, and becomes another really flexible (aaaalmost too flexible, but so much fun) weapon.
- I lucked into Bethany and a mid-game Networked Armor (+2HP to all mechs); with an 8HP biotech mech with overkill healing, I one-shotted every leader for the rest of the game, and that mech was almost always at full HP.
- I was using the Roach enemies and I will say that early game acid really murders these guys; they do so much self damage (especially a higher-HP biotech mech) that I was doing a lot of "die, the siphon-resurrect, then do it again next turn"; but I still managed as indicated above.
- The flipside was late-game acid on enemies made the biotech's overkill healing even more ridiculous. Almost wish I'd found an acid tank.

So overall, super cool. Definitely the most challenging of your squads in the early game (more so than a lot of the official squads, I'd say) but they make up for it later and really make you think. Never found any bugs, and Djinn's sprites are awesome.

I do wonder if it would be worth giving one of them the "pilots survive death" weapon to start? It might remove too much tension, though.
Top

Noticed a weird bug today, not sure what caused it:
- Had the Fission mech aim its attack at a scorpion, with a hornet behind. Neither had any radiation, and Fission was not upgraded.
- The attack showed that the hornet would be repaired (green cross icon).
- Executing the attack healed the hornet.

Never seen that before, didn't appear on any other units I moused over.

Unrelated note: As mentioned, I loved the theme of this squad, and I love Djinn's sprites overall, but really wished the Fission mech looked more mech-y. Today I was messing around just to see if I could make a mech sprite, and I put this together: 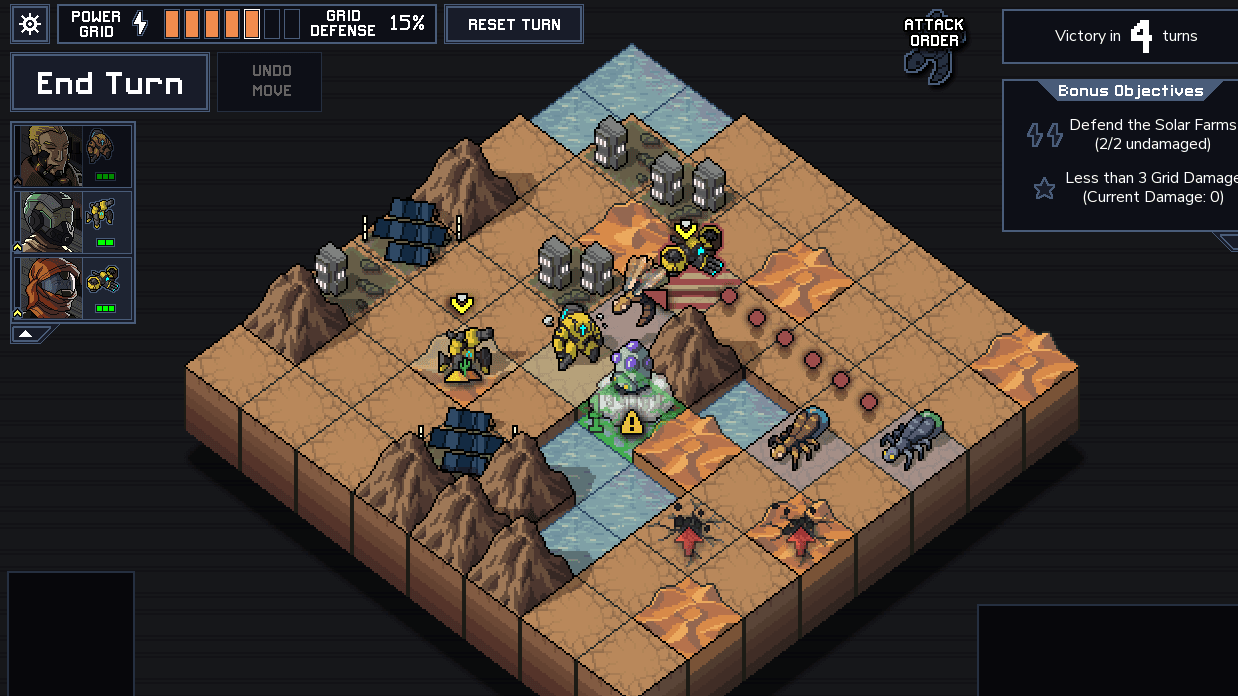 (Based off a nuclear-powered character from something else, which seemed fitting.)

tosx wrote:Noticed a weird bug today, not sure what caused it:
- Had the Fission mech aim its attack at a scorpion, with a hornet behind. Neither had any radiation, and Fission was not upgraded.
- The attack showed that the hornet would be repaired (green cross icon).
- Executing the attack healed the hornet.

Never seen that before, didn't appear on any other units I moused over.

I can't figure it out either; I wasn't able to replicate it whatsoever.
Discord: ATOMiC#9226
Top

Also, the combine fusion beam isn't working for me. Upon activating the upgrade, Fusion Drive no longer applies any stacks of radiation, only dealing damage to those already irradiated. There are also some pretty funny interactions with the radiation passive. Whenever you're using one of the mechs outside of the squad or if you simple have the passive inactive, radiation can still tick damage but no longer losses stacks of radiation. Which is convent if you want to use one of the mechs in custom or random squads but also means it's much better to deactivate the passive until you wish to use it's upgrade.
Top

Everglass wrote:Also, the combine fusion beam isn't working for me. Upon activating the upgrade, Fusion Drive no longer applies any stacks of radiation, only dealing damage to those already irradiated. There are also some pretty funny interactions with the radiation passive. Whenever you're using one of the mechs outside of the squad or if you simple have the passive inactive, radiation can still tick damage but no longer losses stacks of radiation. Which is convent if you want to use one of the mechs in custom or random squads but also means it's much better to deactivate the passive until you wish to use it's upgrade.

If you're using Djinn‘s sprites, that download is outdated; I checked, it's missing an update that fixed Combine. Also thanks for letting me know about the passive. When I decide to get to it, I'll incorporate the sprites into the official post.
Discord: ATOMiC#9226
Top
Post Reply
28 posts