Do you hate train missions? Do you find the vek never die when they get in the way?
Then we've got the product for you! Here we have the Armed Train, it has a railway gun to help take down those city sized vek just a little easier!
Call now 1-800-Die-Scum and you can get a second one FREE!

But once you dive deeper 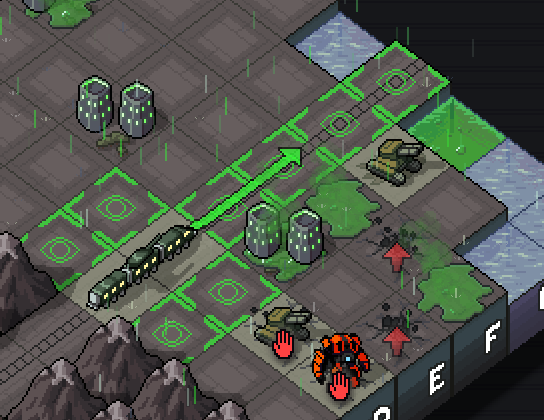 The train will shoot anything to the sides of it or on the tracks for 1 damage on islands 1 and 2, and for 2 damage on islands 3 and 4.
Once it becomes damaged it will NOT shoot anything.
This mod COMEPLETELY replaces the standard train mod, and doesn't seem to show up very often (so if you do hate train missions it shows up less often too

That's about it really, some credits,
Lemonymous made the whole thing basically. Mezzelo made the first iteration but for some reason the sprite was broken so Lemon fixed it (and added some stuff). So this is basically Lemon's mod with the help of Mezz, then I made the artwork.
Some links to a bunch of their stuff - Lemon
Bots'n'Bugs, The Best Mod Squad on Earth, More Bosses, Archive Armors, and RF 1995.
Mezzelo on discord, elozzelo on the forums
Lost Pilots
My other stuff
Red Alert Survivors, A couple color schemes.
Trash modder, asks the good mods for stuff literally all the time. Creator of Cosmic's Colors, Red Alert Survivors, and publisher (lol) of Armed Train
Top

Could you perhaps make a version of this mod that only adds this new Armed Train as a SEPERATE mission? I do not like the original train mission, but I still don't like completely replacing it and basically removing it from the game. It's just personal preference, and I would greatly appreciate it.

It's broken.
Most of the time the game stops the moment the train is supposed to shoot at a Vek because the shot coming from the train never hits (the rocket somehow flies above the map, I saw this once). Going back to the main menu and continuing fixes the game but then the train doesn't attack the Vek.
Top

There's a list of mods that work with the 1.2 patch; I'm pretty sure those base on reflexive fire all broke, and I suspect this one hasn't been updated. If that's the case you'll have to downpatch the game to use it.
Top
Post Reply
5 posts • Page 1 of 1