Distribute and discuss mods that are functional.
Post Reply
14 posts

This mod aims to increase the variety of faces you see and dialogue you read with extra unlockable pilots, adhering as close as possible to the vanilla game.
Currently, this mod contains 15 new pilots, each with their own unique, original abilities, art, and dialogue.
A download is located on this mod's itch.io page.

Lost pilots is arted, written, designed, and programmed by Mezzelo.
Huge thanks to Lemonymous for bugtesting, providing the ReplaceRepair utility and the movespeed library and to him and kartoFlane for additional help with some code snippets!

INSTALLATION
Before anything else, you will need the latest version of KartoFlane's mod loader.

Drag and drop the contents of the ZIP file into the mods folder your root game directory (wherever Breach.exe is located) should have in it. No overwriting of files necessary - if you're doing that outside of updating this mod, you're doing something wrong.

Please finish or restart any existing timelines before installing or enabling this mod.

KNOWN ISSUES
- As noted above, this mod will not work with an existing timeline. You must finish or restart your current timeline to use it.
- There is a small chance of crashing when entering the second phase of the final mission. You should be able to resume playing where you left off without any issues.
- Abilities will not work inside of the test scenario.

If you find anything else, please let me know! You can find me (and all those wonderful folks credited above) through the ITB Discord probably. 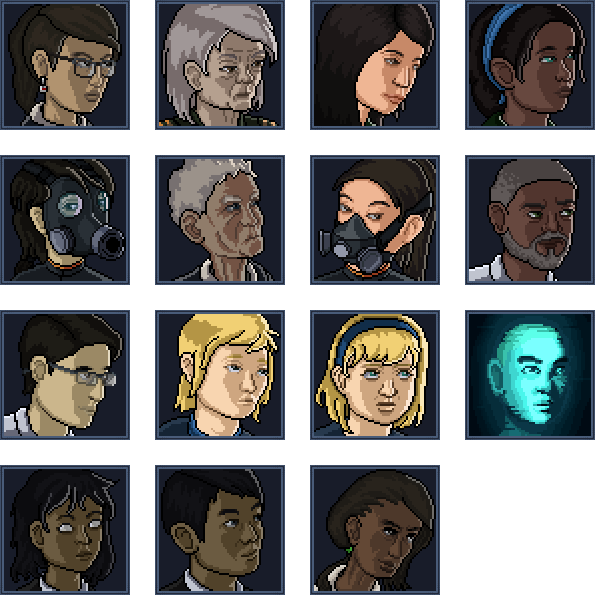 Dana Alms
Antiquated Armors: Cannot move for two turns. Deploys an Old Earth unit on the first turn.
A former CEO of Archive. The refusal of the time travelers in her timeline to make use of her arsenal lead to a disastrous end, one she seeks to prevent elsewhere.
Victoria Swift
Command: -1 move, all other allied mechs gain +1 move.
An Archive commander, and a veteran of wars with and without the Vek. Her advanced age does little to hamper her prowess, as she's proven time and time again.
Akemi Kobayashi
Return Fire: Fires a 2 damage ranged attack towards any enemy that attacks when aligned with this mech.
Known as the Angel of Archive for her incredible results on the field. Some say the nickname is ironic, though few care to say why, and fewer are capable.
Knox Mandaba
Jetstream: +3 move, but must move a minimum of 4 tiles to move at all.
A seasoned pilot of Archive's ancient machinery, promoted to the field for her quick wits and her quicker operation of anything her superiors throw at her.
Masao Sy
Ranged Repair: Repair friendly mechs for 2 health with a projectile, cannot repair self.
An operative under R.S.T. command. His dubious origins are left unquestioned in the wake of his technical and tactical prowess.
Julius Kern
Winds of War: After the player phase, smoke on or around this Mech is absorbed and spread to adjacent enemies.
A former CEO of R.S.T. For all of his ruthlessness and cunning, his inability to win the hearts and minds of the Archipelago effectively ended any chance of victory in his original timeline.
Grizzly Saeki
Focus Shot: Instead of repairing, fires a 5 damage attack only damaging units exactly 5 tiles away.
A covert agent working for the R.S.T. Doubts about her motives are quickly assuaged by her sharp aim and seemingly unfaltering loyalty.
Solomon Renfield
Inertial Engines: -1 move, mech gains 1 movement per turn.
Esteemed scientist of R.S.T. known for his war-time innovations, on the field through some inane turn of events and bringing his knowledge of the world to battle.
Arvin Sanjrani
Status Shift: Swaps fire, smoke and A.C.I.D. of destination with current tile when manually moving between land tiles.
A Pinnacle climatologist, who understands the repercussions of the Vek intrusion on Earth and seeks to go above and beyond in preserving life.
Justyn Attlee
Flash Freeze: Once per enemy attack phase, freeze just before being hit by a hostile attack.
An unlikely candidate for Pinnacle's pilot program, chosen for his sharp perception and his impressive ability to dig himself out of any bad situation.
Leta Narvaez
Preemptive Shield: Shields on repair instead of repairing.
Once a retired veteran from Pinnacle, separated from her children through several timelines' worth of destruction and seeking to repay the Vek in kind.
Zeus
Permafrost: Take no damage from enemy attacks while frozen. Unfreezes on player turn if any damage was blocked.
A former overseer of Pinnacle. He seeks to continue fighting for the survival of intelligent life across all timelines, even from the diminished operating capacity of his remaining core.
Aisa Minh
Reflex: After an enemy has moved, attacks every tile adjacent to this Mech it has moved through.
Detritus ex-law student. Her career-ending disability was augmented by mech sensors and now lends itself to her rapid response against any threat.
Ezel Sinai
Azoth: Enemies lose 1 move a turn, enemies with over 3 move lose 2 move once.
Last seen serving under Vikram's predecessor for some unknown purpose, following unknown orders. His torpid stare does little to divulge the intense knowledge he holds.
Vanya Singh
Corrosive Coating: After each phase, fully heals if alive and covered in A.C.I.D.
A former CEO of Detritus. Her commitment to safety and efficient operation alone proved inadequate in dealing with hazards never seen before.
Last edited by elozzelo on Wed Jun 12, 2019 7:26 pm, edited 22 times in total.
This account uses a different username than my usual one, because either my mail provider refuses to accept messages or the sender refuses to send them. If someone could assist me, that'd be pretty great. ;-;
View the rest of my work at mezzelo.itch.io
Top

The one in the lower left looks possessed. Her irises aren't visible enough.
Top

I should note there's a reason for that in the lore, I'm not that incompetent of an artist. And no, there are no spooky ghosts involved.
This account uses a different username than my usual one, because either my mail provider refuses to accept messages or the sender refuses to send them. If someone could assist me, that'd be pretty great. ;-;
View the rest of my work at mezzelo.itch.io
Top

bumped for update! see above for many, many words. feedback appreciated.
This account uses a different username than my usual one, because either my mail provider refuses to accept messages or the sender refuses to send them. If someone could assist me, that'd be pretty great. ;-;
View the rest of my work at mezzelo.itch.io
Top

Hi Elozzelo!
Amazing work on this mod-- unlocking pilots is one of the most exciting parts of the game, and I've been throwing myself at it trying to catch 'em all since downloading this. I adore the way you matched your art style to the game's, and so far the pilots' lines have been a treat (Solomon is my fave so far)

Quick bug report for you: Seems Knox's ability is glitched so that the restriction is applied (no less than 4) but the bonus (gain +3) isn't. I've attached a screenshots of her in two different Rusting Hulks. 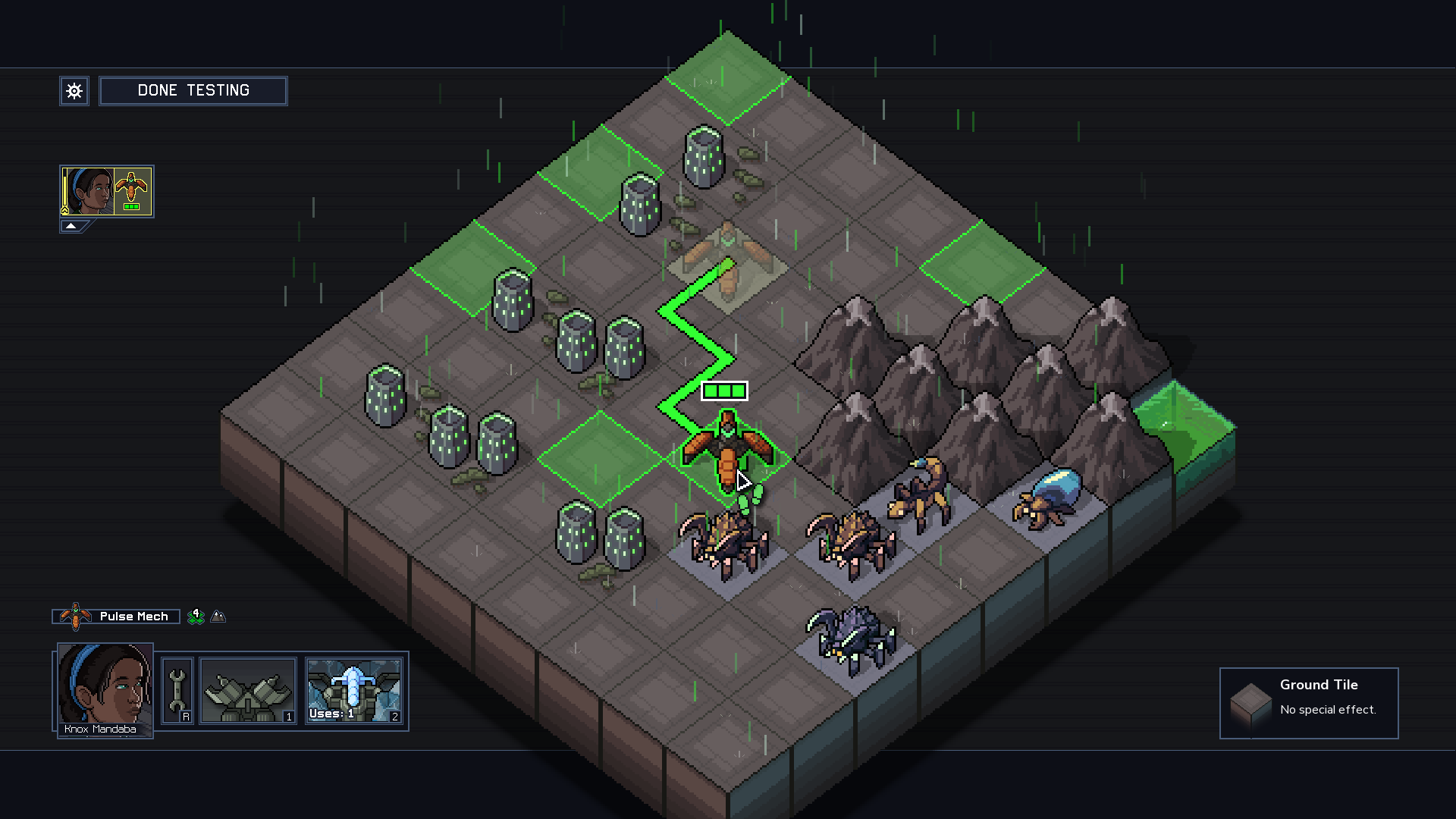 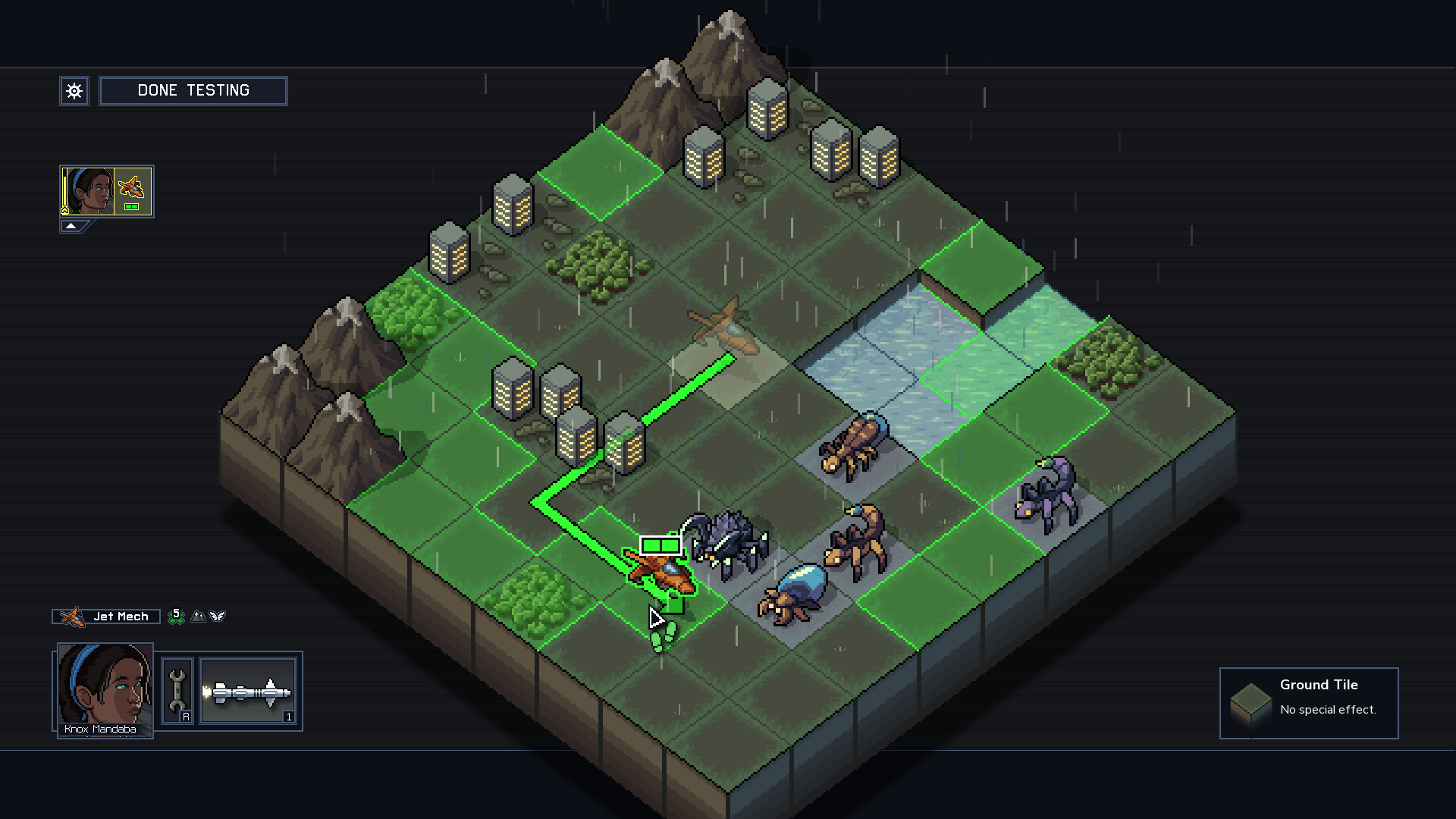 [edit: I misinterpreted the results I was getting at first; updated to reflect the bug's actual effects]
Top

Haven wrote:Quick bug report for you: Seems Knox's ability is glitched so that the restriction is applied (no less than 4) but the bonus (gain +3) isn't.

I developed this mod entirely without using the test scenario (wasn't aware it existed), so things are likely to break inside of it. If you find this happens outside of the test scenario I'll take a look.
This account uses a different username than my usual one, because either my mail provider refuses to accept messages or the sender refuses to send them. If someone could assist me, that'd be pretty great. ;-;
View the rest of my work at mezzelo.itch.io
Top

Didn't realize they were different from a coding perspective.
I've confirmed it working as intended in levels. When deploying mechs and when mousing over units before selecting them, the movement changes don't show, but they seems to work fine when selecting move location.
Top

Hi I've been using your mod and so far I like it. I have a question though, I've unlocked multiple of the new pilots. But when I try to access them on the select pilot page only the first one I ever unlocked comes up. Is there a way to access this second page with the rest of my unlocked pilots?
Top

Bug report: On final mission, if at the start of the second part a mech of yours is randomly placed by the game next to Aisa, she'll attack it with her ability.
Top
Post Reply
14 posts