These advanced Mechs are constructed from liquid metal, which they can expend for powerful attacks. 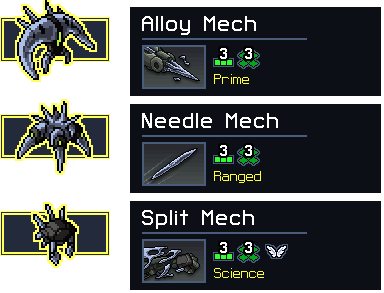 Needle Mech
Needle Launcher: Launches a liquid metal projectile that deals damage. Mechs are healed instead. (1 self damage. 3 damage and push.)
- 1 core: Increases damage to self and target by 1.
- 3 cores: Increases damage by 1.

Split Mech
Mimetic Skin: Shed a Husk and push tiles adjacent to it. Husk can merge with Mechs to heal them and push adjacent tiles. (1 self damage. Deploys a 1hp/3 move Husk unit on an adjacent tile.)
- 2 cores: Sheds the Husk as an artillery projectile.
- 2 cores: Increases the Husk's max health to 2. Husk transfers all health to Mechs when merging.

Download modpack version of all my mods - requires mod loader 2.8.2 or later to function, and ITB 1.2.86.
Mod Loader - originally made by Cyberboy2000 and continued by kartoFlane.
Top
Post Reply
1 post • Page 1 of 1