Distribute and discuss mods that are functional.
Post Reply
9 posts • Page 1 of 1

The Red Alert Survivors are the last remaining units from Command and Conquer: Red Alert 3; only one unit from each faction survived.

First up, the Tsunami Tank, from the Empire of the Rising Sun!

The Tsunami Tank is also amphibious! It can shoot while it is in water.
Using the AP Cannon, a tank like weapon that hits two tiles and pushes the first into the second.

Second on the list, is the Vindicator, from the Allies!

The Vindicator is equipped with BD8 "Bandarilla" Bombs, doing a standard bombing run.

Last but definitely not least, is the V4 Rocket Launcher, from the Soviet Union!

The V4 is equipped with a rocket and can switch the warhead on demand, one hits a single target for massive damage and the other hits a large area for small damage 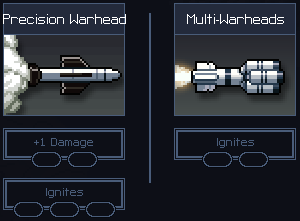 To download the remaining pawns of World War 3, click this link.
Download
Then make sure you have Karto's modloader installed, This Post
Then unpack this beautiful squad into your Mods folder in your steam directory.

This squad is very basic, and not very unique, and has some pretty decent firepower, very little in terms of control though (only one push).
Sorry that the V4 is so ugly, I couldn't get the green and red to look any more like the Soviets from the game. I'm also not going to make any custom sprites or animations or anything because that's really hard.

My Thanks
First thanks goes to Arfy. He helped me make the Multiwarhead work and did a lot of debugging (and plenty of other helpful things) Here is the stuff he has made - Sentient Weapons, Aquamarines, and The Commander's Expansion Pack.
Thanks to Lemonymous for helping me edit the bombing run from Archive Armors, and allowing me to use his Amphibious mech stuff. Here is the stuff he has made - More Bosses, The Roach, The Blobberling, Archive Armors, and RF 1995.
Along with others in the discord helping me a bit with debugging (I think Karto helped with that).

Update 8/27 1:07 AM - Fixed Bombing Run not correctly igniting when the ignites upgrade was bought.
Last edited by CosmicLightning on Tue Aug 28, 2018 4:39 am, edited 1 time in total.
Trash modder, asks the good mods for stuff literally all the time. Creator of Cosmic's Colors, Red Alert Survivors, and publisher (lol) of Armed Train
Top

Well it's something I guess... not a big fan of Red Alert 3 but it's serviceable as a game with interesting mechanics and stuff... I think the Tsunami Tank should be Armoured because during battle it can switch off the main gun to increase the armour which could be represented as such in-game, right?

When you say it's hard to make custom sprites, do you mean in terms of designing it yourself or in terms of putting in the code? Because if custom sprite making is an issue... well I have this Mecha Tengu sprite sitting on my computer... probably next to the other C&C Unit ideas I've made

I was going to do armored for the Tsunami Tank, but it's also Amphibious, and out of all the Main Battle Tanks, they are the least armored, and the only amphibious one, so I felt it was more fitting.

Actually creating them, I could probably follow the ITB Modding Resources Document to figure out how to add them, but I just can't draw the sprites themselves.

Currently I am working on another mod squad where I will actually create custom sprites for them and they are going to not be so basic of weapons. I think it'll be pretty sweet and has a cool gameplay niche, I just have to take the time to actually nail this second project. This Red Alert one I kinda don't care about too much.
Trash modder, asks the good mods for stuff literally all the time. Creator of Cosmic's Colors, Red Alert Survivors, and publisher (lol) of Armed Train
Top

If you can't draw sprites, do what I do and splice them from others. There's a Build-A-Mech by Inventix:
viewtopic.php?f=26&t=32895

Use the parts from the existing Mechs and create a new one from that.

By the way, if you are to delve into Red Alert 3 again here's my recommendations because well I think the units you've used are well... tiny. You need to think big. Maybe not Shogun Executioner big but well... you need to tech up a bit

Prime Mech = King Oni
The Oni can be armed with something like the Charge Mech's Ramming Engines except it doesn't hurt itself in the process. That or it could use a laser like the Laser Mech does.
If you don't want a sprite, the Combat Mech is suitable. Big and punchy. Or the Judo Mech

Brute Mech = Apocalypse Tank
The Cannon Mech already looks like a big tank and it has two barrels...
Perhaps it should have two weapons - one pulls enemies towards it and if they ram into the Mech, it heals the bump damage (or it could be upgraded with Grinder Treads that heal it if it takes bump damage from the weapon) and of course a standard cannon that can be upgraded for more damage.

Ranged Mech = Pacifier FAV
Flying Artillery. Also pretty big. Would have suggested Harbinger Gunship but that's more of a Brute and it'd probably push things to the left in application.
If you don't think it should be flying over cities though, the amphibious behaviour from the Tsunami Tank could be applied instead.
Top

I actually considered the Apocalypse Tank and the Harbinger previously, I decided not to use the T3 units, since they are super powerful in Red Alert, I probably won't do another Red Alert based squad unless it is these big mechs, and that would be later on when I could truly flesh them out and make a sweet squad. I was going to use a doubleshot cannon that Arfy made for me for the Apocalypse tank, but it's a little wonky with how it shows damage, and I thought the T3 units were simply too big and op. For the Harbinger I thought about having it glued to the edges of the map and every turn you have to move it to a tile along the edge of the next side (counter-clockwise at least in my brain, the C&C wiki says that it goes clockwise but it doesn't make sense to me since the weapons are on the left side), but thought that would end up being really hard to make and clunky, not to mention the Harbinger uses the Colliders (which are super op), but the gunship looks super badass, so if I could draw, that sprite would end up looking super awesome.

When it comes to the build-a-mech thing, Arfy showed me it, but to make the C&C Units, I could use like the treads and that's it, the rest would have to be drawn by hand to make the bodies of the units, and I'm apparently too dumb to even use the build-a-mech correctly, but I will have to learn to use it to make this next squad.
Trash modder, asks the good mods for stuff literally all the time. Creator of Cosmic's Colors, Red Alert Survivors, and publisher (lol) of Armed Train
Top

Considering how you're fighting city-sized insects, I think you need those super OP T3 units to stand a chance.
Yes, even the Giga Fortress wouldn't help much

This mod can cause issues for other mods, causing them to crash.

Here is a fixed init.lua for version 1.2.0.
To apply it, simply replace 'CL_Red_Alert\scripts\init.lua' with this one.
Top

Fortunately, Lemonymous had this back up of the squad: https://drive.google.com/file/d/1uNcPwB ... sp=sharing

Note that it kinda worked but caused some bugs with other mods (with my Terran Mechs I think), so, you're warned ^^

I've absolutely no idea if it works with AE.

At some point, I may modernize this squad, but I've a lot of other projects to finish first ^^
You can find my mods here.
Watch the showcases and some other stuff about my ItB mods: here.
Top
Post Reply
9 posts • Page 1 of 1