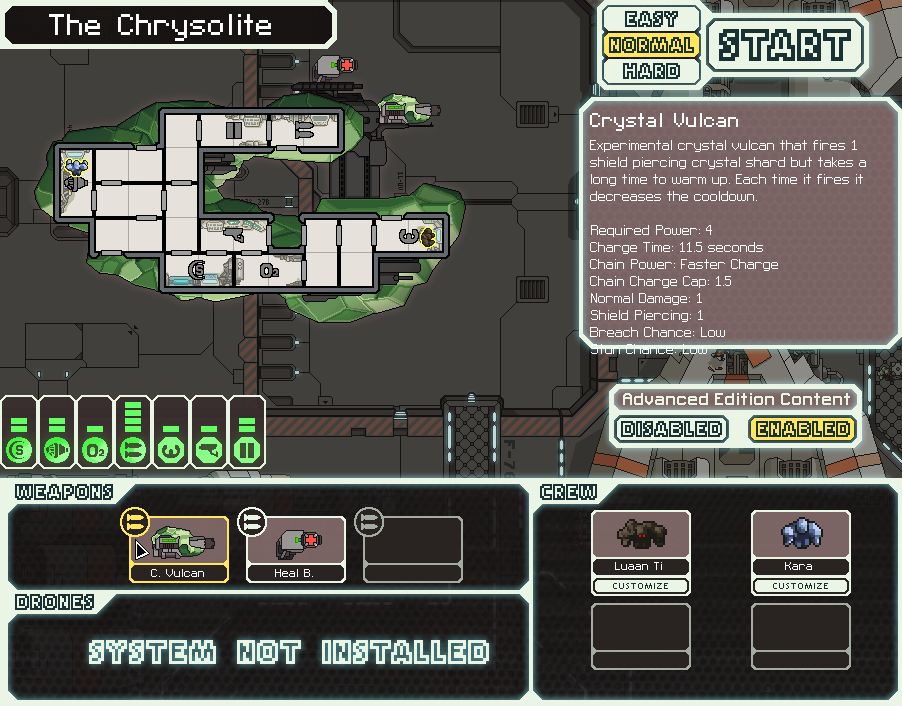 Experiments by crystal weapon manufacturers led to the creation of the Crystal Vulcan. This prototype ship was chosen as a test run of this weapon.

Origin:
So, after my 2 AI ships, The Automaton & The Automatrix, I started discussing ideas of making variants of the Vulcan weapon but still keeping it not-OP. Among the various ideas that I discussed with some of the members of my Discord server, the concept of the Crystal Vulcan took form.

Since I have less artistic talent than an actual brick, R30hedron and Arfy volunteered to provide the ship images and the weapon images respectively. And even then, it still took me a few months to get the ball rolling on this mod because I put the pro in procrastination. And at the end, Arfy had to pester me constantly to get me off my lazy bum.

This ship replaces the Crystal Cruiser Type A, The Bravais.

Story:
Nope. Just go out there and Vulcanize everything

Features:
* The Crystal Vulcan is very slightly slower than the regular Vulcan but more than makes up for it with it's 1 layer shield piercing that every crystal weapon has. Not to mention, it can still punch through multilayer shields just fine.
* Unfortunately, being a crystal weapon, it's shots can be defended by defence drones.
* To make the ship less OP, considering you start with a friggin' Vulcan, you get no medical station. Better keep that Heal Bomb around.
* You're also understaffed with 2 slow-moving crew. But one of them's a crystal so boarding strats are definitely viable.

Strategy:
What strategy? It's a friggin' VULCAN! Go crazy XD

Showcase Videos:
Maiden Voyage/Test run on my channel
Stream VOD
Warning: the above run was extremely lucky so may not accurately represent the early-game struggles with this ship. After all, a single damage in weapons declaws you pretty hard.

Known Issues:
Hopefully none. Please let me know if you find any and I'll try to fix it.

Credits:
* The Crystal Vulcan weapon images are made by Arfy.
* The hull, gibs, cloak etc images are all made by R30hedron. He also recoloured the Crystal Vulcan from it's original blue colour (like the vanilla crystal weapons) to green, in order to match the ship.

Super Big Thanks to both of them. Without their help this ship would not exist. I would argue that they're more worthy to be called the creators of this ship than myself.

* Big thanks to fdagpigj, Biohazard063, Mr Easy Money and lowranker for all their help during the creating the ship, bug-testing, making the weapon animations and at all the times I ranted and raged because of my lack of understanding of xml code.
* Ship made using Superluminal by KartoFlane
* And major thanks to many members of The Stuffs Squad and The Biodome Discord Servers with the brainstorming parts. However minor it was, it certainly had some hand in the making of The Chrysolite.

Now what are you still waiting for? It's a friggin' VULCAN

Anistuffs - The Indian Let's Player.
Here's my Youtube channel with over 1500 LP videos: https://www.youtube.com/user/Anistuffs
Why not pop over and say hi

https://www.youtube.com/watch?v=ZrAmxn2G1eY Well I had some fun let's playing this ship
I make a lot of lets plays of FTL, I also use mods I find on this site http://www.youtube.com/playlist?list=PL ... 06hca_PXuX
I am also a modder as well, here is my mod hub viewtopic.php?f=11&t=32269
Top

Now this is one of the best mods ive seen. Making a vulcan not overpowered should be hard but you did it or i guess your friends did it... the ship is good too.