Ever wanted to get blown up even more often?
Shuttles do exist in the FTL universe. For example, if you board an enemy ship, then proceed to get your teleporter destroyed, an event box informs you that your crew has taken a shuttle back to your ship. Likewise, another event compares a ship to 'a runabout'. So I wondered: What do the Shuttles of FTL look like? Rather than be content to simply wonder, I decided to create this very mod.

I'd like to introduce the Gallei XII and the Machiavelli VII--a pair of Shuttlecraft as playable ships!
Both Shuttlecraft have lower health than your standard ship, and come with a more basic armament than your typical ships. They start with more advanced FTL drives and evasion than preset ships, however, so fleeing from your enemies is much easier. The models are the best I can do using MS paint, (I know) but I tried to make them as feel refined as possible. Both shuttles have working gibs and weapon mounts. 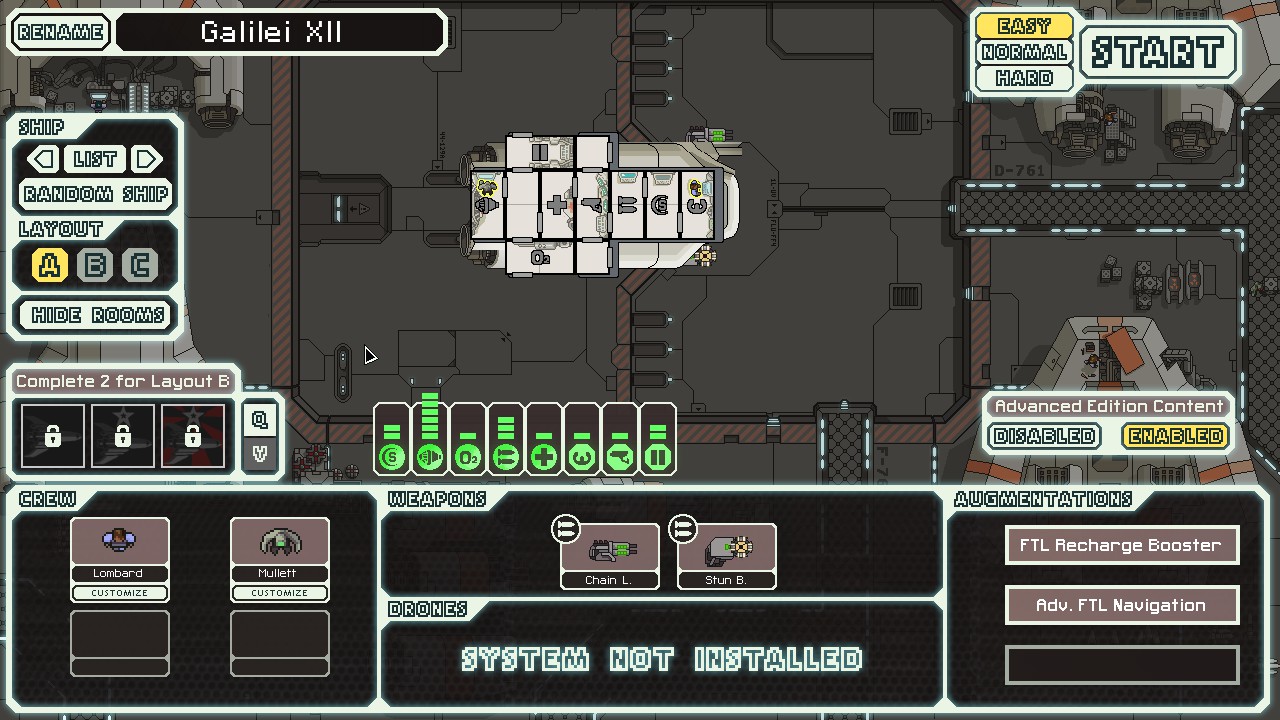 An old shuttle dating back to the days of the first Kestrel cruiser, the Gallei has served on research stations, colony ships, and even, for a short time, the Kestrel itself. The modifications it has received over the years have toughened its hull and overclocked its engines, but it still remains weaker than fully-fledged cruisers or even reinforced freighters. Time your jumps wisely--with less health, the advanced FTL drive is critical to surviving tough fights. Replaces the Stealth A. 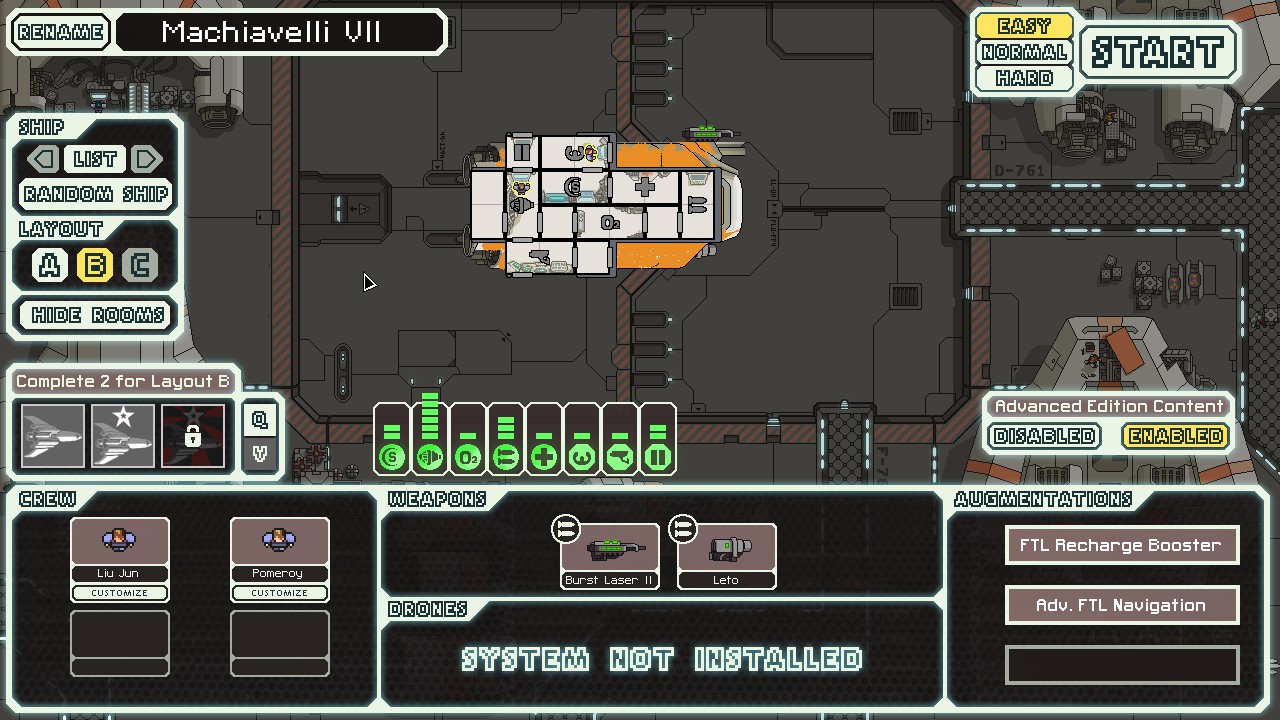 The Machiavelli was stolen by the Rebellion for a brief period of time for an infiltration mission which would be thwarted by Federation Intelligence. Before the rebels had enough time to even finish the shuttle's new paint job, the Federation managed to reclaim it after boarding and capturing the Red-Tail. This shuttle lacks the extensive modifications of the Gallei, giving it a much weaker hull. However, the Machiavelli is fitted with a more powerful armament than the Gallei, making it a glass cannon in comparison. Once again, don't be afraid to flee from battle--the ship's fragility makes running away even more important. Replaces the Stealth B.

I'm not sure what I should think of Mediafire. As a mod-user, I hate it, but as a modder, I love it. Huh.
The Machiavelli doesn't have a thumbnail, and the Gallei's thumbnail is bad. I know.

I'm not sure what I should think of Mediafire. As a mod-user, I hate it, but as a modder, I love it. Huh.

You should most likely use Dropbox than, basically the same thing as Mediafire.

Both ships have pretty interesting starting augments -- I understand it's meant for lore 'n' such, but it's basically free scrap once you get to a store.
Engine power is extremely unnecessary, lowering it down to 3-4 would make it much more balanced.
The Galilei, the stun bomb is quite a strange starting weapon -- could be swapped for an Ion I.

I'm not sure what I should think of Mediafire. As a mod-user, I hate it, but as a modder, I love it. Huh.

You should most likely use Dropbox than, basically the same thing as Mediafire.

Usually I'm used to downloading mods from Github or sites built for the mods of specific games, but Github had an irritating sign-up process. I'll look into Dropbox then, thanks for the advice.

Arfy wrote:Both ships have pretty interesting starting augments -- I understand it's meant for lore 'n' such, but it's basically free scrap once you get to a store.

Yeah, I realize that they aren't really that useful, especially the FTL recharge booster. I just wanted to provide some compromise for the lack of hull strength. Even if the player sells the augments for scrap, it's still some reward to compensate for the 20/15 hull health.

Maybe I should swap the recharge booster out for a fire suppression system. It's lore-friendly, and it helps counteract both shuttles' unintended weakness--fire. Plus, the player's less likely to sell it.

Arfy wrote:Engine power is extremely unnecessary, lowering it down to 3-4 would make it much more balanced.

Yeah, I should have decided that any amount of power that broke the UI was too much. Once again, I was trying to balance the starting levels against the permanent health disadvantage. Around 4 seems more balanced, I'll fix it.

Arfy wrote:The Galilei, the stun bomb is quite a strange starting weapon -- could be swapped for an Ion I.

I chose it because it was strange. I was trying to make a unique starting armament of light weapons. I don't really want to force the player to stockpile missiles on top of everything else, though, so I'll just switch it.

Yeah, I was trying to make it seem like there was an area around the airlocks. I don't really like how it turned out. I'll just touch up the sprites, add a little airlock model, then move the floor back.

I was trying to use MS Paint to do that, but it failed horribly. I'll remember to use GIMP.
Top

Alright, I've fixed up the Gallei, as suggested. As well, I've touched up the gibs and ship appearance. They should feel much more polished now.
Top

Arfy wrote:You should most likely use Dropbox than, basically the same thing as Mediafire.

Yeah mediafire has garbage adds, even more so if the user doesn't use addblock. Dropbox has limits on download volume, but that really only matter if your mod is super large and get 10k+ downloads.

Hyperspace Dogfights, my latest game project. You can get it on Steam!
Tweet Tweet - CE Tip-Jar - That other game I once tried to make.
Top
Post Reply
5 posts • Page 1 of 1