Distribute and discuss mods that are functional.
Post Reply
2 posts • Page 1 of 1

A few days ago this reddit thread has been linked on the ITB discord's modding channel, and I decided to pick it up, since it seemed like an interesting project to tackle.

This mod adds a toggleable user interface which shows movement and weapon loadout of all of your mechs, as well as their upgrade status. It can also optionally show the names of pilots and their mechs' weapons in the bottom left corner (can be disabled in mod options), to help people who may not be familiar enough with the game to immediately recognize each weapon, or know what each pilot does.

Essentially, it makes it easier to take a screenshot which contains all information needed for people to theorize a solution to the situation presented on the game board.

A picture describes it better, I guess: 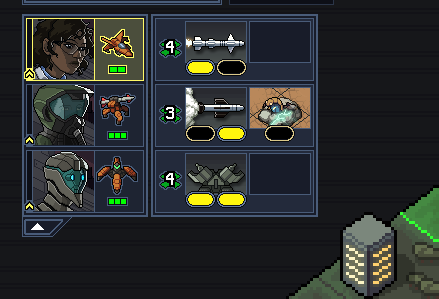 When in-game during a mission, press F1 to toggle the UI. Pressing F1 again dismisses it.
If you don't want the bottom-left corner text, you can disable it by going back to the main menu, clicking the Mod Content button > Configure Mods > clicking gear icon to the right of Comprehensive Screenshot > unchecking Show Text Frame. You'll have to start a new game for the changes to take effect, though.