I am developing a boardgame adaptation of FTL as a one on one ship combat game. This is NOT a straight adaptation of the full FTL game, with exploration, upgrading, and so on. It is, however, a simulation of two upgraded ships going at each other with FTL mechanisms. I always wanted to have more challenging fights after the flagship is defeated, so here's a way to go against a friend- PvP with FTL. This time, the enemy is smart!

The goal is to start with a budget, something like 1000 credits, and build a ship using the cost figures in the game. Then, fight.
While FTL's mechanics fit a turn based boardgame structure pretty well, there are still some questions to be answered. I hope the sub and the experts that look into the gears that make the game work can help out.

This is NOT and never will be a commercial product. It can however be a home made print and play game for that fans can put together as a passion project.

First, here are some pictures to show progress. Ignore the hex terrain underneath, it is from another game. 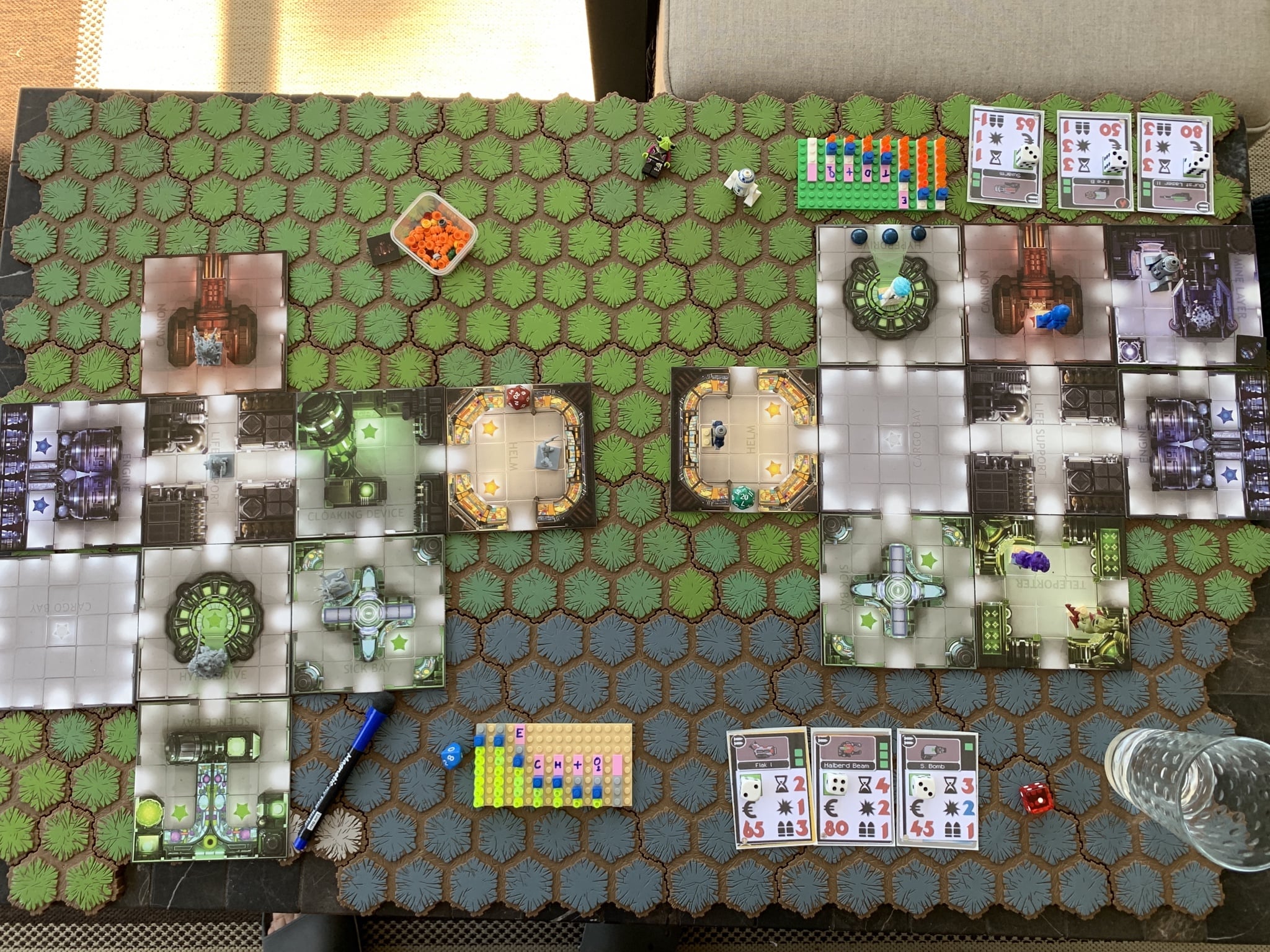 Two flagships ready to go at each other 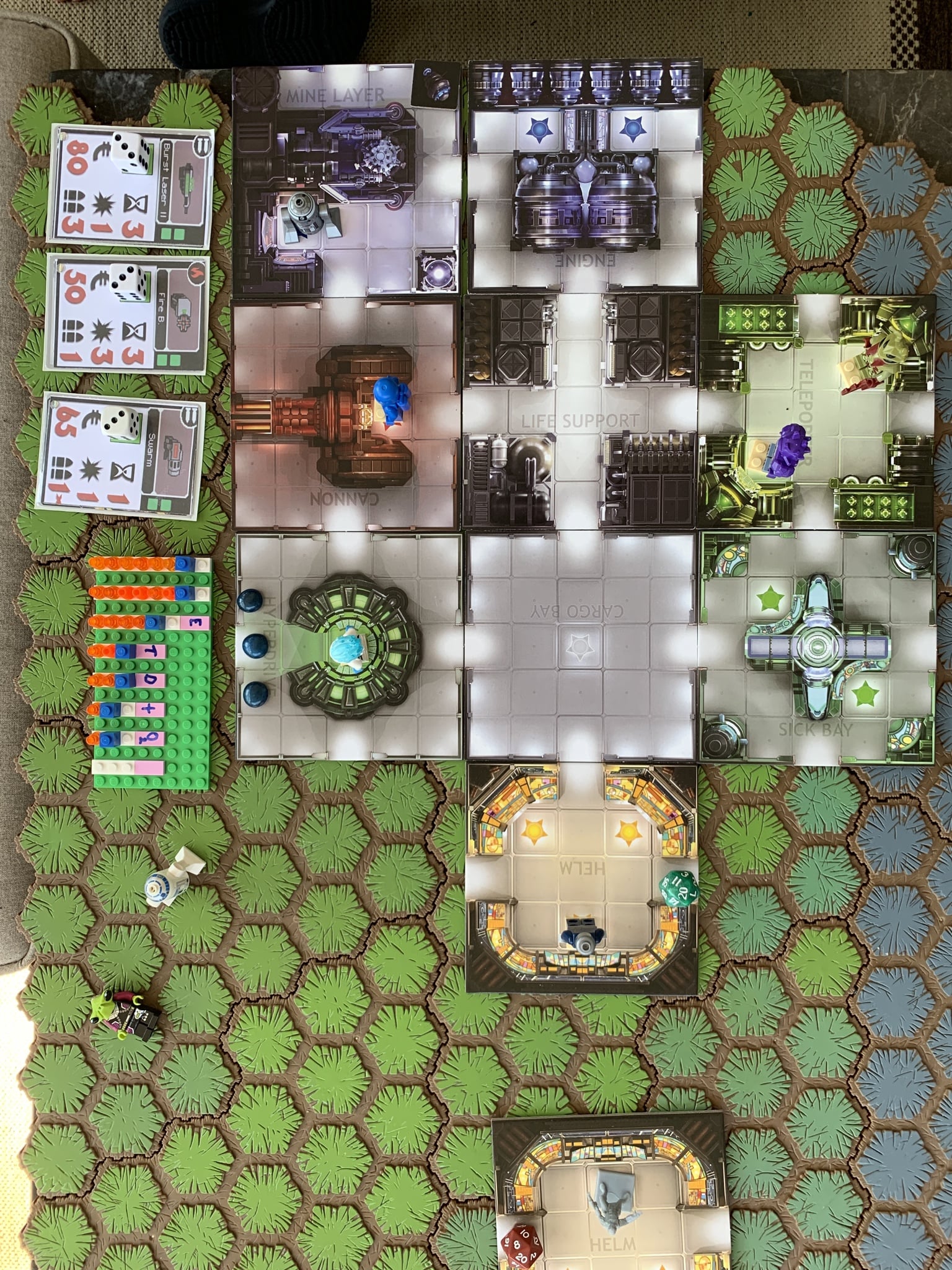 I know people will want to know if they can duplicate this and try it out for themselves. The answer is, "Yes!" but of course there's a cost. You will need the rules and the components.

Most of the components you see here are from a different board game called "Battlestations." It sells for $70 on Amazon. It's a great game by itself- a hybrid of RPG and board game implementation of FTL in a campaign setting, with a ton of detailed actions with skill checks, alien races and so on. There's a ton in the box. If you ever wanted to play FTL as an RPG, I highly recommend this game, but you will need a group, as well as a "game master" player. It comes with all these ship module tiles (and more you don't see here), about 40 figures, tokens, and of course its own rules.

The Battlestations rules don't fit FTL hence my effort to develop something else. More on that later.

The rest of the components I am using are Lego. It works out great for moving power around without knocking tokens and beads all over the place accidentally. There is also some printing and cutting involved for weapon cards. Ans still some beads to track shields, broken systems, and so on.
Of course you can always use something else. You can print out the tiles on paper yourself, or even use note cards, maybe even sticky notes with various systems written on them. You can get beads or wooden cubes to track various things for very little cost. It all depends on how nice you want it all to look. 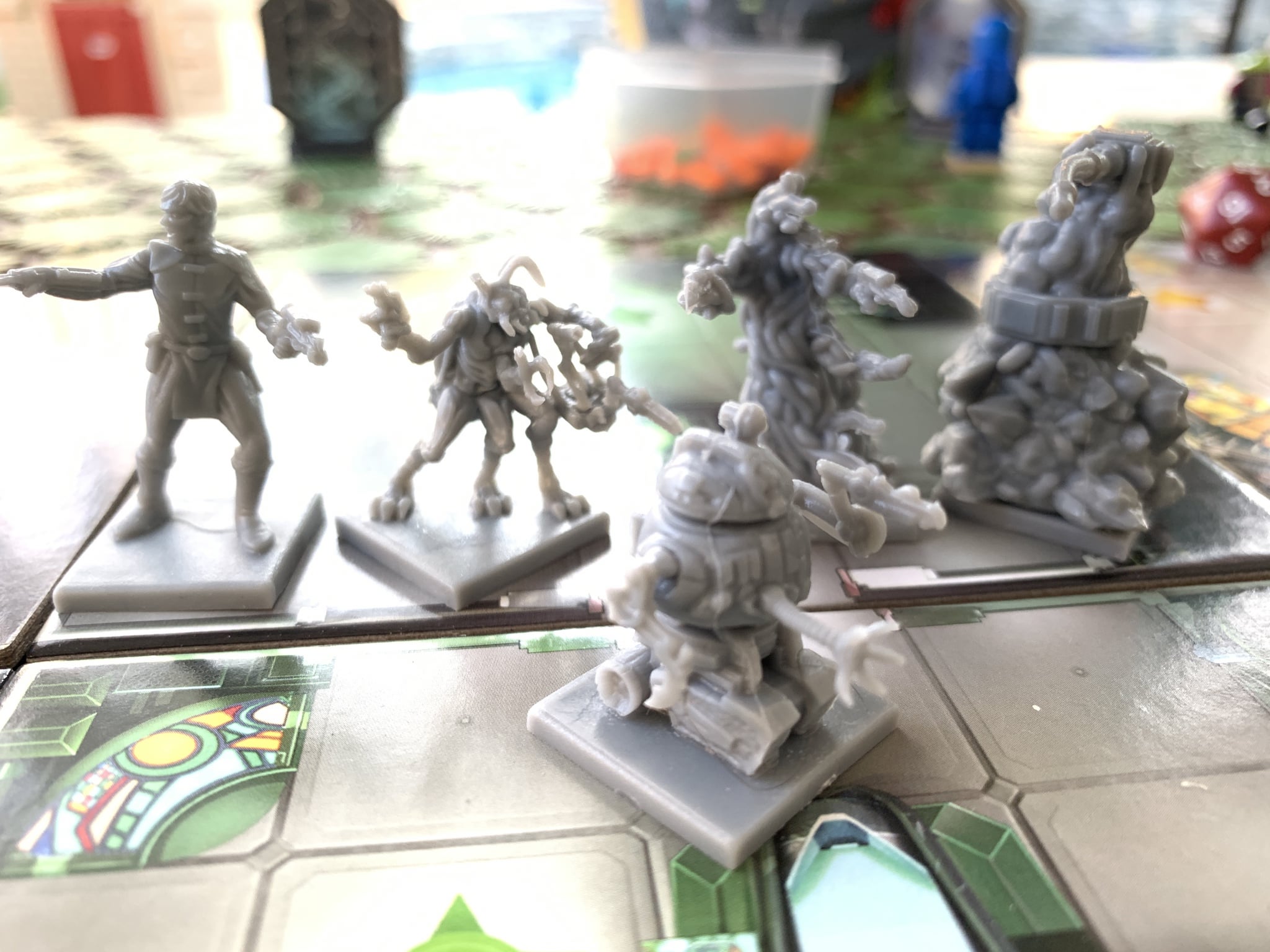 Battlestations crew: Can you guess the races? 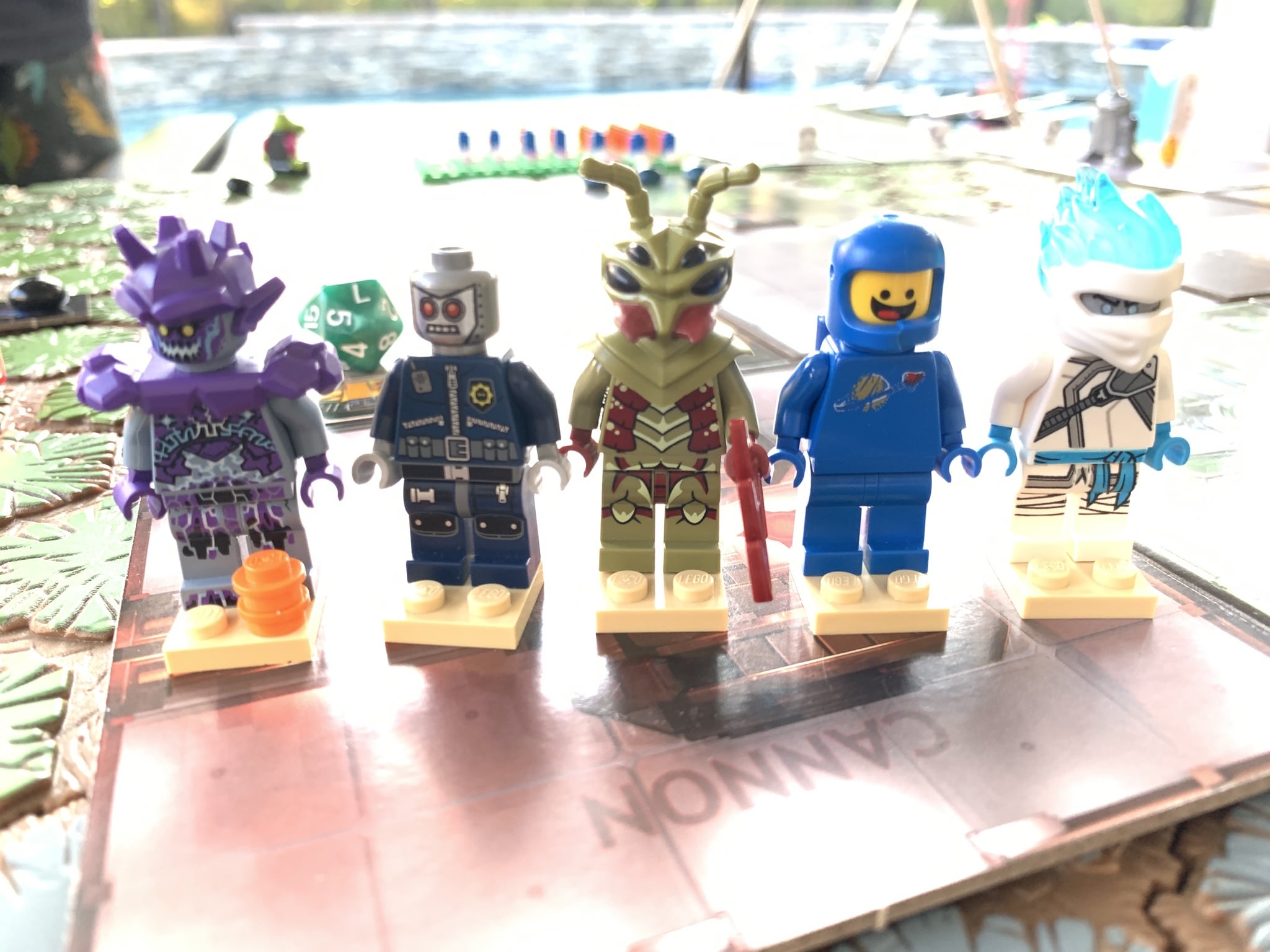 Lego crew: Can you guess the races?

I am playtesting the rules. The game goes fairly quickly except for boarding. Then things slow down quite a bit, because there's a lot of individual crew movement and book keeping. I feel pretty good about the authenticity of the action. One round represents about 5 seconds of action- so each ion damage is 1 round, system cooldowns are 4 rounds, and so on. For weapons, the round represents 4 second with some rounding, to have more granularity. Real time continuous events have to be rounded to five seconds- the amount of hand to hand combat damage in one round is about 5 seconds worth, healing in one round is five seconds worth, and so on.
While most of the mechanics of FTL are pretty clear, some are not. So here are a few questions to get started.
Fire is difficult to model with the turn based gameplay here. When fire starts in a room, I notice the location seems to be random. Does the location matter (which tile it is on) matter? I think it doesn't, as the crew seem to take damage regardless of whether they are standing on fire or not.
What is the fire damage to the system in the room? Does it immediately break one bar?
What is the dps of fire? I can see it for crew, but it's hard to tell for the system. If I say that fire will take out one bar every round (five seconds), does that seem right?
For the crew it seems to do about 45 damage before it goes out- am I on the right track there? That's half the health of most; quite a lot. Since there are no half turns, staying in fire will be a big thing in the board game.

Do multiple fires burning increase the damage on crew or the system? If one crew is fighting two tiles of fire, will it take more damage?

Doors that enemy boarders break and go through remain broken right? If they choose to go back to the first room, they don't have to fire on the door anymore. But then the doors are fine once they leave?

In a board game where a round equals 5 seconds, it's not possible to implement 10% bonuses by manned stations or experienced crew. Right now, weapons charge in 2,3,4 rounds roughly corresponding to 4-8, 9-12, 13-16, 17-21 seconds. Manned weapon station and experienced crew bonuses can't reflect here because there is not enough granularity. Dropping the number of rounds down by one would be too powerful I think. Any thoughts on making crew useful to man stations?

If I can get help here on making this work, I will come back and keep posting. I am only now learning about how the game really works, so opinions will be helpful.
Thanks for reading. Here are a couple more pictures for fun. 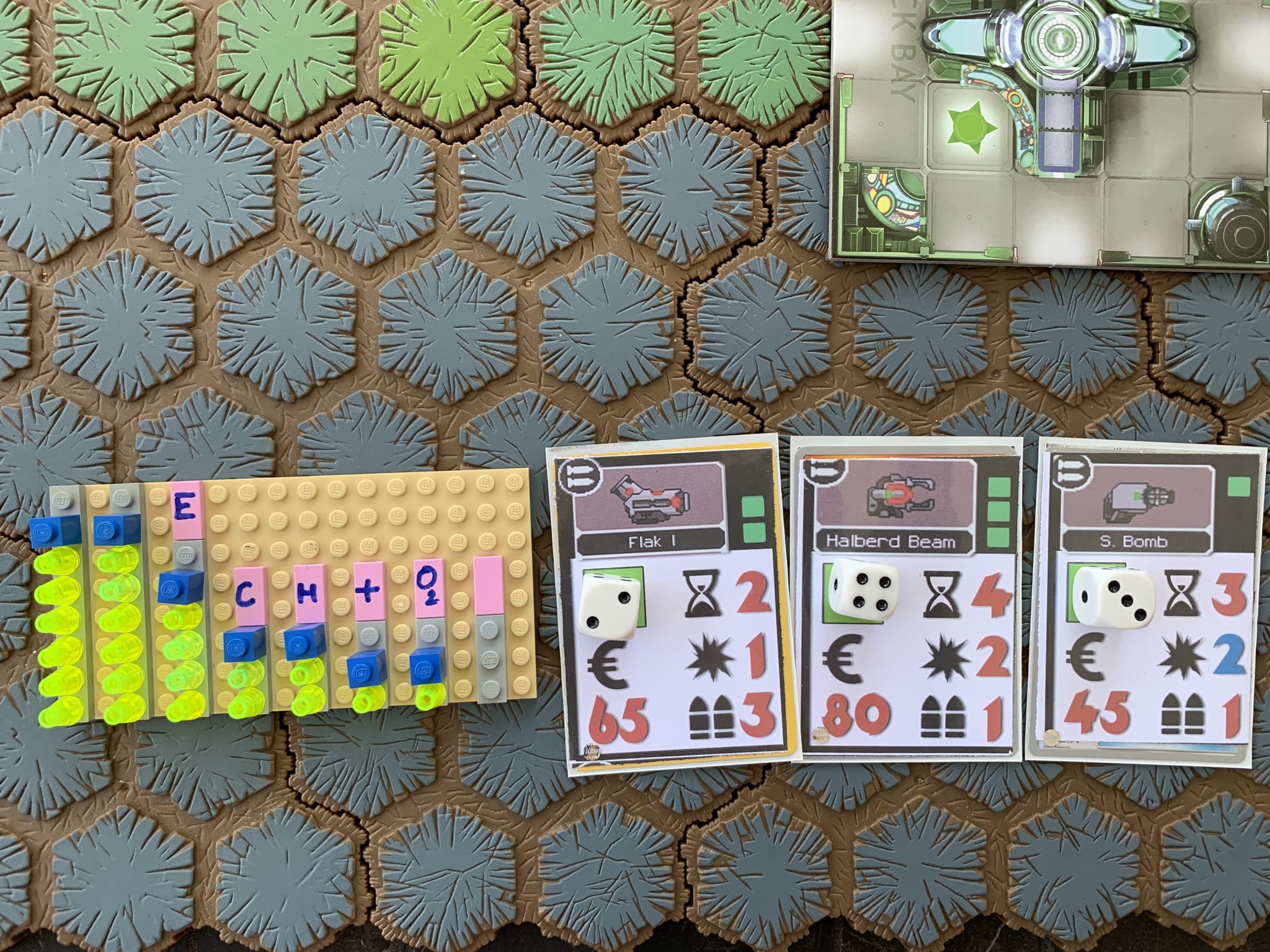 Close up of power system and weapons. 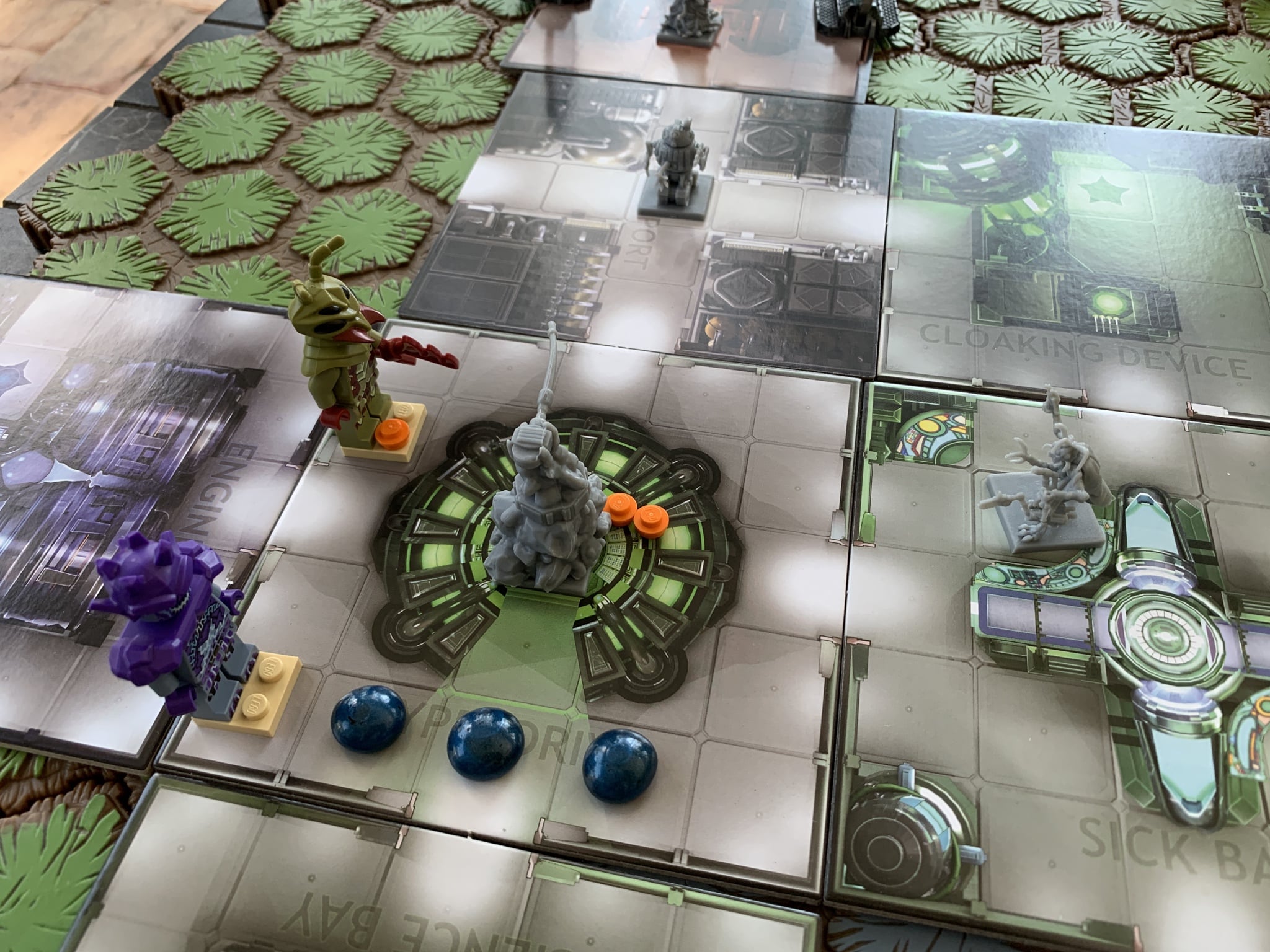