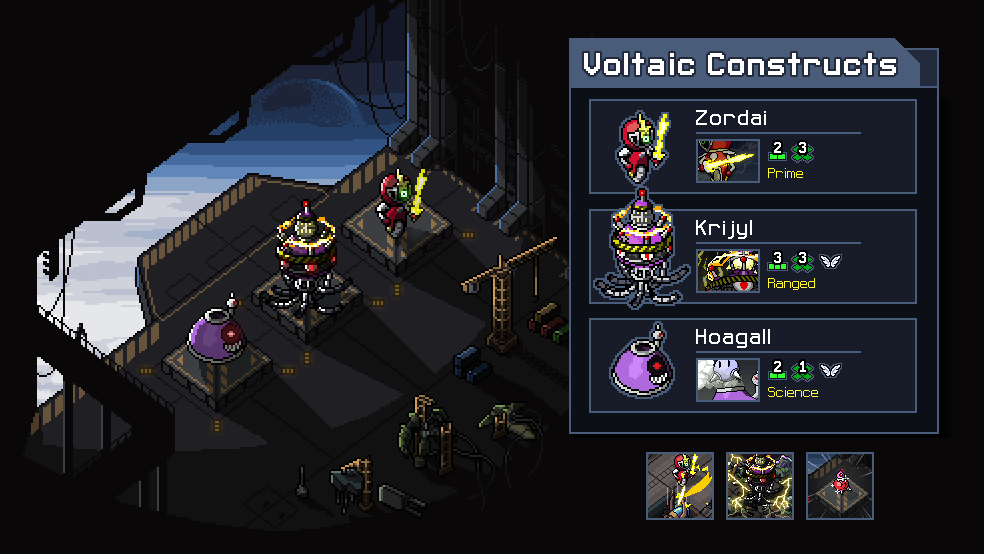 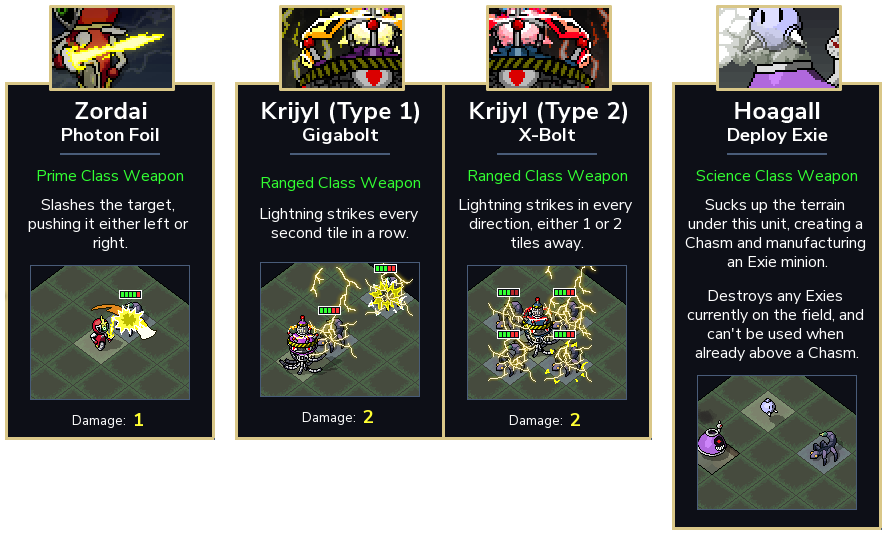 Here's my first mod, the Voltaic Constructs! It's an unorthodox team focusing on low-damage pushes to set up lightning combos with the Krijyl.

These are based on enemies from the game Copy Kitty (main site/Steam/itch.io), which is a super cool action game made by me and one other person over the course of 7 years. You should try it out!

I always wanted to make a tactics game with Constructs, but game dev takes forever, and ItB ended up being similar to what I was planning. So why not add some Constructs to it! I needed a small side project between my big stuff anyway.

Zordai - Prime class
Photon Foil: Slashes the target, pushing it either left or right.
This is a well-rounded unit that can both damage and push, especially useful for getting things dislodged from corners.


Hoagall - Science class
Deploy Exie: Sucks up the terrain under this unit, creating a Chasm and manufacturing an Exie minion.
(Destroys any Exies currently on the field, and can't be used when already above a Chasm.)
This is a tricky unit. Exies have a dash attack that pushes enemies, but it deals zero damage. The Chasm you create can really hamper the Zordai's movement, but maybe there's some ways to take advantage of it...


Krijyl - Ranged class
Gigabolt: Lightning strikes every second tile in a row.
This is the star of the squad. It can't push anything, but it can deal big damage. Use the Zordai and Hoagall to line things up, and then blast them all at once with the Krijyl!
You can also swap out for an alternate Krijyl type with the X-Bolt weapon, in the mod options.

1. Install the mod loader.
2. Download the mod here, extract the zip and place its contents in the Mods directory.
3. Enable the squad in Mod Options ingame.

Special thanks to Lemonymous and tosx on discord, and the rest of the community there! I asked probably 50 questions while making this since I never even touched Lua before.

I might add more Constructs sometime later!
Last edited by AzureLazuline on Wed May 20, 2020 5:52 pm, edited 3 times in total.
Top

Just updated the mod to work with ItB 1.2. The only change I needed was removing a ref to a library that I wasn't using to begin with!
Top

It is no exaggeration to say that this is probably one of the best MODs of ITB. I actually saw a post about this MOD most of the year ago, but never played it because its art style is just too un-ITB.

There are quite a few MODs that offer Mechs that rely on deployed units to fight, and Hoagall is the best designed one in my opinion. Although the deployment Exie can eat the foot spawning tile seems a bit OP (especially with Archimedes), the interesting movement restrictions balance it to a reasonable level.

As for Krijyl, its attack animation is just so damn cool. I really like it!

However, I think this squad is too strong in blocking enemy spawning, and once it enters an advantageous situation it can rely on blocking to make the rest of the turn into garbage time, which is slightly boring.
Top
Post Reply
5 posts • Page 1 of 1