Commandeered from ruthless mercenaries, these Mechs are deadly at close range. 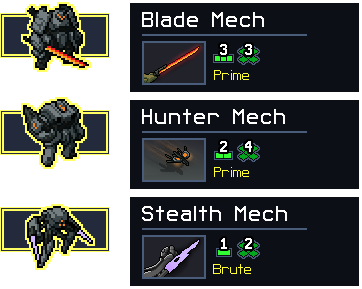 v0.04
- Update to latest modApiExt to improve compatibility with other mods.

v0.02
- Weapons are now properly added to the shop when the shop mod option is enabled.

Thanks for your fantastic work.

I tried all of your squad mods, and two of them failed to work. Hydro Leviathan's error could be fixed by adding a parameter to the lua function, whereas Mecha Ronin just crashes the game and leaves no log (even with the log file option at the mod loader turned on). I'm not sure if it occurs to others, but can you fix the bug or give me any idea to solve it?

Again it was fun to play with your superb mods! I look forward to your future mods

PS.
Oh, you posted the fix for Hydro Leviathan! Well, I'm a bit late to inform you of the issue.
Top

I'm not sure what the issue would be; have you checked that your game and mod loader are up to date? Mecha Ronin v0.02 works fine for me.
Top

My game and mod loader are the latest. After I unlocked the rest squads, this mod started to work. Not sure why, but unlike your other mods, it seems this mod crashes the game when no squad is unlocked.
Anyway, I'm glad to play your nice mod! Thank you very much.
Top
Post Reply
5 posts • Page 1 of 1

Users browsing this forum: No registered users and 7 guests