Distribute and discuss mods that are functional.
Post Reply
23 posts

These Mechs employ powerful, precise attacks that benefit from planning. 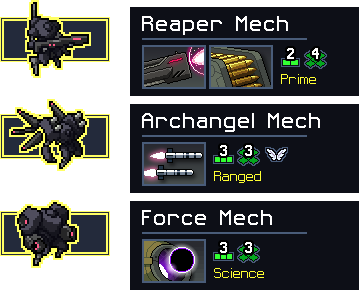 Reaper Mech
Long Rifle: Fire a powerful projectile at a target 2 or more tiles away, pushing yourself back. (4 damage.)
- 1 core: Shoot through buildings and friendly units.
- 2 cores: Increases uses per battle by 1.
Autoloader: Push a tile and refill weapon uses.
- 1 core: Apply A.C.I.D. to target.
- 1 core: May leap away from the target.

Force Mech
Grav Pulse: Pushes adjacent units away from a nearby unoccupied tile. (Range is a 2 tile diamond; can target anything besides units.)
- 1 core: Extends range by 1 tile.
- 2 cores: Can target units, pulling adjacent units into them.

v0.10
- Fixed squad achievements so they can't trigger in the weapon preview.

v0.08
- Weapons are now properly added to the shop when the shop mod option is enabled.

v0.07
- Nerfed the Force mech's Crush back to the non-insta-kill version, after two successful 4-island Hard runs of testing.

v0.06
Making the WIP official. Old version is still archived in the download link.
- Reaper's No Recoil upgrade replaced with Scope.
- Force Mech's Grav Pulse completely reworked to be much more useful. May still be refined (Crush upgrade could be too strong).

v0.04
Fixed the bug that was still in the shop code, hopefully for real.

A few notes:
- My first mod and first squad! This was mostly a learning project, and I haven't actually played through with v0.01 yet. So no idea if they're fun or balanced.
- The code's probably not super clean either, but it's been working fine with every other mod I've enabled.
- Feedback most welcome.
Top

Before I even play the mod, let me just say that the sprites look great. Good job.

For anyone thinking about trying them: I did a quick 4-island Hard run and they did well. Probably a little too well, but nothing jumped out as horrendously broken.

The super strong upgrades may get a little pricier (almost definitely Archangel's Smoke, and possibly Reaper's +1 use).

I also didn't find much use for Airburst, since it's so imprecise and potentially dangerous. I'm considering reworking it if I think of something better that won't make them stronger (first idea is smoke adjacent to the target tiles is removed and adds +1 damage each to that target).

Also, Reaper's Autoloader is going to get a minor buff to its Reposition upgrade, making the leap optional.
Top

I appreciate what you have accomplished here but I have not had the time to report my experience with this squad (still in the middle of a Hard run) but I have already read some of your proposed changes. I am on the third island and overall I have enjoyed this playthrough. The upgrades seem appropriate but I understand your concerns with the Archangel's. I will post a thorough evaluation soon but I wanted you to know that somebody is trying it out and appreciating your time, creativity and work.
Top

Awesome, thanks for trying them!

I updated the first post with change notes, as the squad has been updated to v0.02. The only real gameplay change is Smoke costing 3 cores now.
Top

Ok, so i finished my Hard run but only did 3 islands due to time constraints and the fact that tosx was already considering changes. I did not feel that this squad was imbalanced in any way. I had plenty of thought provoking turns and had some difficulty with power grid damage which worked out well by the end. The Reaper did not feel overtly strong though it has some early game damage dealing advantages, but by the latter half of the game was actually less powerful than the Combat Mech from the Rift Walkers. I felt that all the upgrades were useful and balanced except for the Reposition on the Autoloader which did not seem worthwhile and I did not bother with (though I noted that tosx has now made it optional, just not sure if it is worth a core). The +1 Use upgrade on the Long Rifle worked beautifully and was necessary even though I only ever got 3 uses out of it in one mission. Even in the finale I needed the Autoloader just as much as the Long Rifle on both levels. The Airburst upgrade for the Archangel's weapon was not really functionally sound since it loses its push on the affected tiles which was way more effective than the damage (don't know if that was a purposeful result or a programming overlook or bug). It is also not even operatively productive allocating a core for until the Smoke upgrade has been obtained. Not sure if the new increase in the core cost is required for the Smoke but it doesn't bother me either way. On a side note I custom squaded the Archangel with the Jet and Rocket mechs and completed a ridiculously easy 2 island hard run. Great job, tosx, in balance, spritework and inspiration. Thanks for a cool new squad!
Top

Thanks for the report! Sounds like you found a bug, Airbust isn't supposed to remove the push. I'll fix that. I'm also leaning pretty strongly toward the Airburst rework I mentioned.

I agree the Autoloader's Reposition is pretty unnecessary at this point, but I guess it doesn't hurt anything.
Top

I thought it might be. It is a little odd because it still has its push but if it deals damage on a tile it no longer pushes anything on that tile.
Top

...aaaaand I think I know exactly what's wrong with it, at least

The damage being added has push 0, must be overwriting the default 0-damage-push-1 on those tiles.