Distribute and discuss mods that are functional.
Post Reply
6 posts • Page 1 of 1

Ever shot your mechs without meaning to? Or caused bump damage that you didn't notice? This mod is for you.

Every time you try to execute an attack that would cause friendly fire - either directly or indirectly - this mod will show a dialog window asking you to confirm your targeting decision.

The mod currently detects the following forms of friendly fire, customizable by mod options:
Environmental (and other) effects not included. 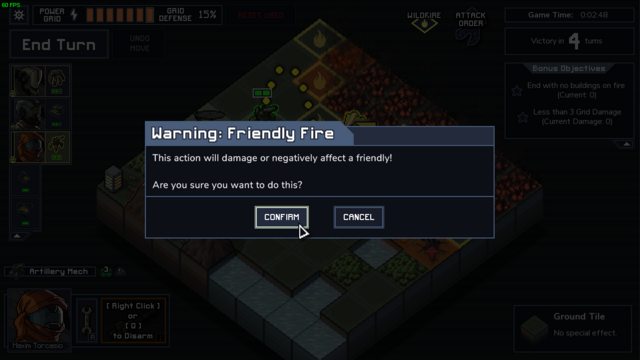 Version 1.5.3
- Even more fixes to modApiExt

Version 1.4
- Added sound when the warning dialog is shown
- Fixed a bug that prevented the warning from being shown in some cases (hovering over a tile and selecting weapon with a hotkey, then clicking)
- Friendly fire warning can now trigger on damage to buildings (configurable)

Version 1.1
- Friendly fire warning should no longer trigger on self-damage

Is there a way to disable the ui when we use weapon that do self-damage ? Because it's quickly annoying with the Hazardous Mechs and I don't want to disable the mod because it's always useful when you missclick
Top

Done and done! Not sure if it'll work perfectly, so do let me know if it doesn't work as expected.
Superluminal2 - a ship editor for FTL
Top

So for some reason I had a new version of this mod sitting on my hard drive that I somehow forgot to release. It includes a fix for the undo-abuse bug, so it's fairly significant... Also some convenience features to play nice with other mods, like marking a weapon as ignorable for purposes of friendly fire, or custom SkillEffect for purposes of friendly-fire checks.

Version 1.6
- Weapons can now define `kf_FFW_Ignore` field and set it to `true` to cause the weapon to never be checked for friendly fire.
- Weapons can now define `kf_FFW_IsFriendlyFire` function to implement a customized check for whether the skill will result in friendly fire.
Superluminal2 - a ship editor for FTL
Top
Post Reply
6 posts • Page 1 of 1