About:
Bots'n'Bugs is a mod for ITB aiming to increase the number of enemies, in order to make each run more varied.
Everyone likes different things, so everything this mod adds can be toggled via the Mod Configuration menu before starting a new game. 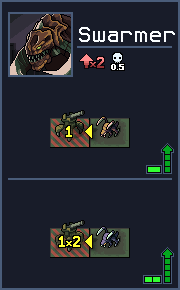 Special Abilities:
Always spawn in pairs.
Count as half a unit for counting how many new units to spawn. 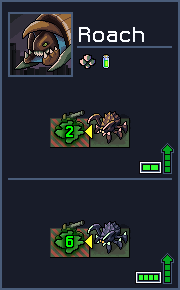 Special Abilities:
Spit A.C.I.D. at it's target before attacking.
Armor. 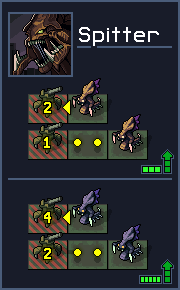 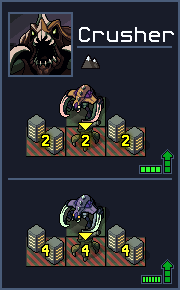 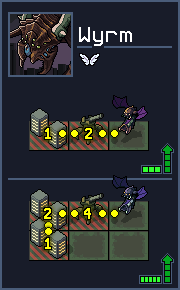 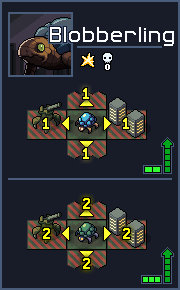 Special Abilities:
Always explodes on death, damaging all adjacent tiles.
Does not count as a unit for counting how many new units to spawn. 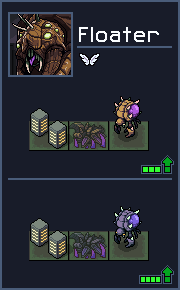 Special Abilities:
Spawns a Colony at it's tile, and moves away.
Flying. 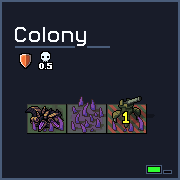 Special Abilities:
Expands creep every turn.
Can target anything connected to it by creep.
Stable. 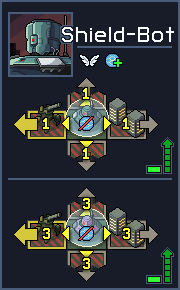 Special Abilities:
Shields itself before attacking, and expends the Shield in order to attack.
Damages all adjacent tiles.
Flying. 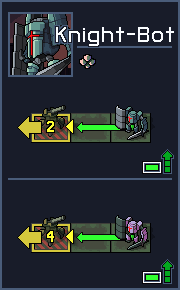 Acknowledgements:
Cyberboy2000 - Thanks for the quick work on setting up the first mod loader.
Automatic - Thanks for the work on the dll's used by the mod loader for additional modding functionality.
Kartoflane - Thanks for managing the mod loader, modApiExt and for always being available to answer my questions about them.
Rusted - Thanks for discussion about modding, balance, and always wanting more.
Tarmean - Thanks for creating your C-Utils dll, further enhancing what we can do in ITB.
Discord - Thanks for being a welcome place with friendly people.

3. Scroll down to Readme.md here, and follow the instructions there to install the mod loader.
4. Download this mod; open 'ITB-Bots-n-Bugs-master' and place the 'Bots'n'Bugs' folder found there into the 'mods' folder in your ITB directory. (you don't need the licence, readme or git files as a normal user)

Enemy options:
All islands spawn with 3 Core unit types, 1 Psion unit type, 2 Elite unit types (initially hidden), and one Leader.
For non-bot Vek added by this mod you can choose whether they take the slot as a Core, Elite or Psion unit type.
Each Vek can also be individually disabled.

Leader options:
You can toggle leaders on and off.
If a base enemy type as well as this option is enabled, then its leader variant will be able to spawn as the final boss on an island.
Enabled leaders can also spawn in the final mission.

Delay Roach Spit:
An option added by request - if enabled Roaches will not spit A.C.I.D. on the same turn as they burrow out of the ground.

Reset Tips:
If enabled when exiting the mod configuration, all tutorial tips added by this mod will reset and display when appropriate again.

2.0.11- Hopefully fixed Swarmers jumping under bombs and pylons on the final mission part 2.
2.0.10- Wyrm nerfed - Attack no longer bounces if it hits an empty tile.
2.0.9 - Alpha Blobberling's tooltip now correctly states it deals 2 damage.
Fixed a bug causing enemies to cancel their attacks when they lost their shields. Thanks Tosx for both reports.
2.0.8 - Fixed an issue causing other modded unit traits to be hidden. Thanks to Tosx, Arfy and R30Hedron for discovering this.
2.0.7 - Fixed a rare crash involving Techno-Crusher mashing two pawns together when one of them was standing on a pod mark. Thanks to Rithaniel for the report.
2.0.6 - Fixed an issue causing spawning Swarmers to be able to step onto a pod and destroy it. Thanks Smutty for the report.
2.0.5 - Fixed an issue where Camila could get webbed on Creep. Thanks M3aslyTpod for the report.
Colonies will now lock their targets once the player hits End Turn, and will no longer retarget for any reason outside of the player's turn.
2.0.4 - Swarmer clones can no longer move into locations where a pylon will fall in the final mission. Thanks Nard for the report.
Swarmer clones can no longer move into your deployment zone.
Swarmer clones can now only emerge if they can get to an empty tile within their movement allowance. (was infinite range)
2.0.3 - Fixed rare crash introduced in version 2.0.2.
Added 'Volatile' icon to Blobberling.
Blobberling can no longer benefit from Psion bonuses - No longer possible to explode twice.
Various small fixes.
2.0.2 - Fixed several typos - Thanks to Tosx.
Fixed a bug that could cause two pawns to end up on the same tile when using Kaizer Blades to pull them both towards an explosive mine.
Improved attack preview of Techno-Crusher - it should now preview the correct amount of bump damage when 2 pawns are mashed towards an empty tile.
Improved attack preview of Techno-Roach - it should now preview the correct amount of damage on adjacent pawns not already affected by A.C.I.D.
2.0.1 - Fixed a bug that prevented bosses to be added to the final island.
2.0.0 - Added Spitter, Wyrm, Crusher, Floater and Colony.
Added bosses for Swarmer, Spitter, Wyrm, Crusher and Floater.
Added achievements and unlockable Techno-Vek Mechs for Swarmer, Roach, Spitter, Wyrm and Crusher.
Removed Garden Psion.
1.3.4 - Added KnightBot Portrait.
1.3.3 - Fixed Blobberling crashing the game.
Reworded Garden Psion's description to not mention fire damage due to one strong voice calling for it. No mechanical change.
Added tutorial tips to several units and attacks to help explain unique behavior.
1.3.2 - Added Swarmer Portrait.
1.3.1 - Renamed Zergling to Swarmer - more inline with vanilla naming conventions.
Fixed an issue that could cause Swarmers not to split after spawning.
Alpha Swarmer now has 2 hp, up from 1.
Swarmers now count as regular units (unlike spiderlings), limiting new spawns as normal.
Redesigned Garden Psion a bit, to make it less problematic to npc units.
Vines now deal fire damage, so fire immune units take no damage.
Vines cannot spread to occupied tiles (except vek occupied).
Both stages of Vines light on fire if damaged.
Vines are created in a cross pattern instead of just beneath the Psion.
1.3.0 - Added Zergling.
1.2.3 - Roach Leader should no longer mess up artillery trajectory.
Garden Psion can no longer spawn in Psion Leader mission.
1.2.2 - added Blobberling portrait.
1.2.1 - updated all my mods with correct modApiExt versioning. If you encounter bugs, update all your mods.
1.2.0 - added Knight-Bot and Garden Psion.
1.1.1 - modApiExt compatibility with other mods not using it's latest commits
1.1.0 - Blobberlings now avoids mines.
Various misc internal code updates that does not affect balance.
1.0.2 - Added Option: "Delay Roach Spit" - "Roaches won't spit the turn they emerge from the ground"
1.0.1 - Roach Leader - Added water sprite.

Hey Lemonymous, really interested in chatting with you about a handful of your mods, email me at arongarst@gmail.com when you get the chance.
Top

Nice! I really like the challenge and the presentation is spot on. One thing though: would it be possible to prevent them from spitting acid during the turn they emerge from the ground? Spitting during the first turn of the battle is perfectly ok, because you can prevent that from happening by choosing where to drop, but getting attacked by something you couldn't see is close to feeling unfair. Sure it's a bit like leaper's webbing, but there are more ways to deal with webbing than there are with acid.
Top

Merged my enemy mods into a single mod to make everything simpler to keep updated. (If someone would care to delete the Blobberling thread, I wouldn't mind that)

Added an option for your request Karsta.
(Also added a similar option for "Delayed Webs" in the Difficulty Modifiers 1.0.3. mod)
Top

But I have little request about "blobberling"
if I'll kill them before they killed themselves, then they're not explored. (like Blobber's blob.)
Can you offer me these options?

I started testing this mod a while ago, and after a lot of tinkering with it, I decided it's time to do a mini review.

Roach,
At first, I felt this not-starcraft 2 Vek would be overpowered. I removed the armor, I reduced speed, I reduced damage, just to pump everything back to their original values, because the Roach, just feels right. I don't know whether you just combined stuff into one unit to make a reasonably fast (between scorpion 3 speed and hornet 5 speed), reasonably resistant (between scarab / scorpion but armored), supportive assault troop that's capable of dealing damage but also, indirectly enhancing the other Vek's damage.
I love it. It's balanced. Easily one of my favorite enemy types.

Garden Psion,
An other extremely well designed unit. I love it how the vines take a turn to be active, making them less of a threat, but quite problematic if left untouched for too long. Especially when the garden psion spawns at the beginning or in the second turn of the match. An extremely original idea. Again, I like it a lot.

Shield-Bot
The mini-variant of the Pinnacle Robotics Boss (that is one boss that seldom shows up). A nuisance, especially for squads that like to stick together. More so the alpha variant. I like it overall. However, I didn't encounter it all that often and you can delay it's attack by hitting it.

Knight-bot
An other very fun opponent that spices things up, especially when you like to bunch up your mechs. With sufficient support from surrounding Veks, this pesky little bot, especially the alpha variant can prove quite bothersome. Also missing the custom artwork.

Blobberling,
The only Vek I have mixed feelings about. I played around with it a bit. I upped the suicide damage, then damage that it does when you kill it. Tried playing around with the two death variants (suicide vs killed), upped suicide damage (x2 of standard dmg, so 2 on normal and 6 on alpha), so you were forced to kill it unless you wanted it to inflict massive suicide damage. Turned out, I was happy whenever these guys showed up, because I could push them into other alpha vek killing them when they exploded. I ended up upping suicidal damage to 2 for normal and to 4 for alpha variant, with an on killed damage of 1 and 3. I guess the main problem is that they explode once and then they are gone. Some times you can just block them, and let them explode, moving away. I am also missing your amazing artwork for these guys.

Suggestion: Maaaaaaybe.... making them web would make them more fearsome? Maybe also give them 1 armor? A combination between the Blobs and the cocooned spiderlings.

Other than the Blobberling, this is just an other solid and very nicely balanced mod. And I love it. Works well with the slightly nerfed More Bosses mod

Nah, the blobberlings feel just right to me. Nuisances that pester the player, not all out enemies
Top

Thank you for the interest!

I'm glad you like the mod overall. I try to make each enemy interesting to play against with many options for counterplay, since Vek rarely seem to land a blow against mechs.

Regarding the Blobberling. While a very weak enemy that can be dispatched with a simple push, it has gotten the most requests for nerfs. I'm certainly surprised you want them buffed Rusted. You can understand how difficult it is to balance it with that range of feedback.
Personally I like how they need to be handled with care and can be used against the other Vek, while not being too dangerous if not handled right.

I hear you about the missing portrait for some enemies, and I've decided I will add them in, starting with the Blobberling. Popular or not, it deserves a portrait. I will see when I can get the Knight-Bot a portrait as well.

I gave the blobberling an other try and I admit that combined with the difficulty modifiers mod it can get quite annoying (with 7 / 8 max enemies everything is painful).
Having roaches and blobberlings as new enemies really spices up my runs

I love the new portrait. Quick work as always!