by Antern
After 130 hours of playing this game I decided to make a thing, that I wanted to see as the Crystall A or Fed C or.. Stealth D. Something unusual, a little bit gimmick and fun. So I made the Pillar. Cruiser that forces you to play Steal B (waiting for holy-beam and avoiding drones) and Crystal B (smash rebels crew and systems to death 1 by 1) at the same time. 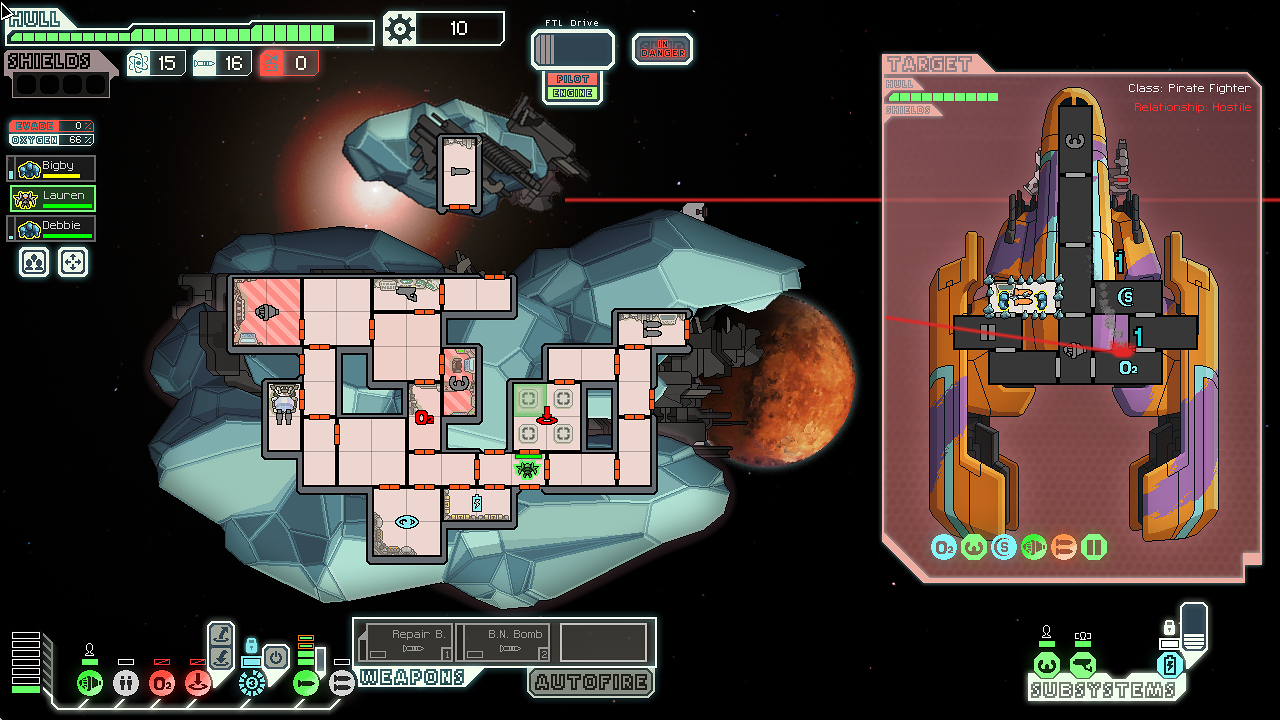 Here is the link: https://www.mediafire.com/file/qr0n7z24i20wnve/ThePillarV3.ftl

I will be very grateful for advices on balancing it.

by Biohazard063
Well, congrats on your first mod.

As far as feedback goes, I'll refrain from talking about balancing and such since you have enough experience to know about that and what people see as balanced differs.
What I can tell you though is that multiple artillery systems are likely to cause problems.
The main problem being that resetting the run or continuing (after a save and quit) removes all but one artillery weapon.
There's also the thing of one not being able to be turned off or upgraded but I assume you noticed that during testing.

Furthermore, I see you have disconnected rooms, not sure if those rooms can be accessed or not, but keep in mind that it does come with a problem.
And yes, I did notice the repair bomb as a way to repair the systems, the problem however are lanius boarders. Though rare, do exist. If those end up in there, they won't be able to be killed.
Which means the ship is in constant "danger" and you can't upgrade anymore for the remainder of the run or until an enemy ports them back.

Besides that, some minor graphical things like the glow around the ship and some awkward interior images (O2 for instance).

All and all, not a bad first mod. Keep up the good work !

by Jimli_
Glad to see more people making mods, but I have just a small criticism. There seems to be little reason to use your artillery beams when you start with 4 very powerful boarding races and a 4 man teleporter to use them all at once. It's likely they would do more harm than good if you accidentally forget about them and blow up an enemy with all your crew still on board.

Anyways, welcome to the modding community!

edit: What biohazard said as well

by Antern
Thanks you for advices!

Didn't want to add custom weapons.. But I think it will be great for breach beam.

Current changes:
- Made Artillery beam, that deals 1 ion damage and 1 breach per room
- Removed the second Lanius due to having strong oxygen-kill from artillery
- Removed second artillery.. I didn't now that can cause glitches.

I've tried to make a multi-shot anti-crew bomb ( having something like 30 sec cooldown and 3 bombs each deals 1 crew damage damage (45hp) but sadly It doesn't work.

Working on graphical issues. I am very bad at graphics =)

by stylesrj
Does the Artillery Beam have a long length? Because giving it ion damage makes it very overpowered, even at 1-damage as it technically would be doing 2, plus whatever damage it does to systems. I think it's even worse with shield-piercing.

Main points:
1) Any big ship with a 4-bar shield will reduce breach efficiency.
2) Shield damage (low piercing) works to compensate 3-slot weapon system and reduces it's breaching power.
3) Not so powerful as you can think. Min 20 delay and RNG matters. You will be damaged a lot before getting shields.
4) No hacking, no mindcontroll, no drones. It goes similar to fed c in that way.
All times are UTC
Page 1 of 1
Powered by phpBB® Forum Software © phpBB Limited
https://www.phpbb.com/