It has come to my attention that ship mods don't exactly play correctly when used with Arsenal+ because Arsenal+ redefines vanilla blueprints as other weapons, leading to problems.

This mod is here to fix those problems so that the ships have the weapons and drones they were supposed to have.

see main post for download link, and as always let me know if there are any problems with the mod not working properly

--
-
in other news, translating the base mod treks on, there are still many events left to go, but after a break from it I'm back to translating, so I'll try to get the update that's been sitting around forever finally finished

so... the new sector isn't ready yet, but it made sense to release the rest of the update I suppose so here it is. I don't really wanna say much other than that there's a bunch of new stuff in the 1.25 update. you can look at the changelogs for more info.

the A+ addon is more challenging now too as all events give lower rewards.

The following categories have been updated:

Base Mods (Data and Resource Pack)
reflects 1.25.1 update to original mod, including new weapons and events, and other changes, including a new sector

Ship Packs (DLC Ships and DLC Ships-2)
updated to the latest versions of their Russian counterparts.

Difficulty Settings (A- and A+)
A- was updated to accommodate the new sector.
A+ was updated with one of the files inside getting a file extension change.

----
so... quite an update if I do say so myself. I've added Dropbox links in case you don't like Mediafire because it drops you in an ad after the download or if it straight up doesn't work, so that's good.

added rusty flak cannon -- bug fix mainly relevant to the 1st DLC Ship pack, but the weapon in question may pop up elsewhere too

The following categories have been updated:

Base Mods (Data and Resource Pack) -> 1.25.2/1.3
reflects 1.25.2 update to original mod, including event changes, balance changes, an error correction and a new enemy Rock ship class.
not going to get specific because that'd ruin the surprise of the events...

DLC Ships Pack 1 (Rather minor fix) -> 1.4.1
added the word 'Cruiser' which was missing from the Black Pearl's ship class, which shows up in the ship list in the hangar and the ship high score screen.

----
this is subject to change, but Mediafire links won't be used from now on (they're still there for addons that didn't get updated today) because it drops you in an ad after the download and the link isn't https, however, if anyone cannot access the Dropbox links, tell me, and I will add Mediafire links.

reflects 1.25.3 update to original mod, and a variety of description and other changes of my own making so the mod feels better both as a whole, and in English.
big updates:

The annoying whining flashbang explosion from enemy weapons is no longer there. This was heavily requested, set your ears at peace.

The auto aggressor enemy ship class no longer crashes the game at all upon destruction, so hooray for no freezing.

A slew of various description changes from drones to weapons to augments to events which I've been working on to make the mod both read better and play better.

----
as always, you can find the full details in the changelog

I don't know what mr_easy_money did, but 2 years ago, I noticed in misc.xml the use of \n\n in the file. My attempt to use it in a ship description failed, but I don't remember if i tried \n or \n\n. I didn't investigate this further.

RAD-82 wrote:I don't know what mr_easy_money did, but 2 years ago, I noticed in misc.xml the use of \n\n in the file. My attempt to use it in a ship description failed, but I don't remember if i tried \n or \n\n. I didn't investigate this further.

oh right, forgot I didn't share how I did it. so as RAD-82 pointed out, using the \n character doesn't work, it just writes \n in the description, and doing any variation on that leads nowhere either, \\n, etc.

so I chanced upon the solution when I tried inputting many lines of text inside the flavorType element of a weaponBlueprint (the almost entirety of the bee movie script, http://www.script-o-rama.com/movie_scri ... nfeld.html, initially just for laughs). it ended up with this (lol there's text at the top-right of the screen, all bunched up), 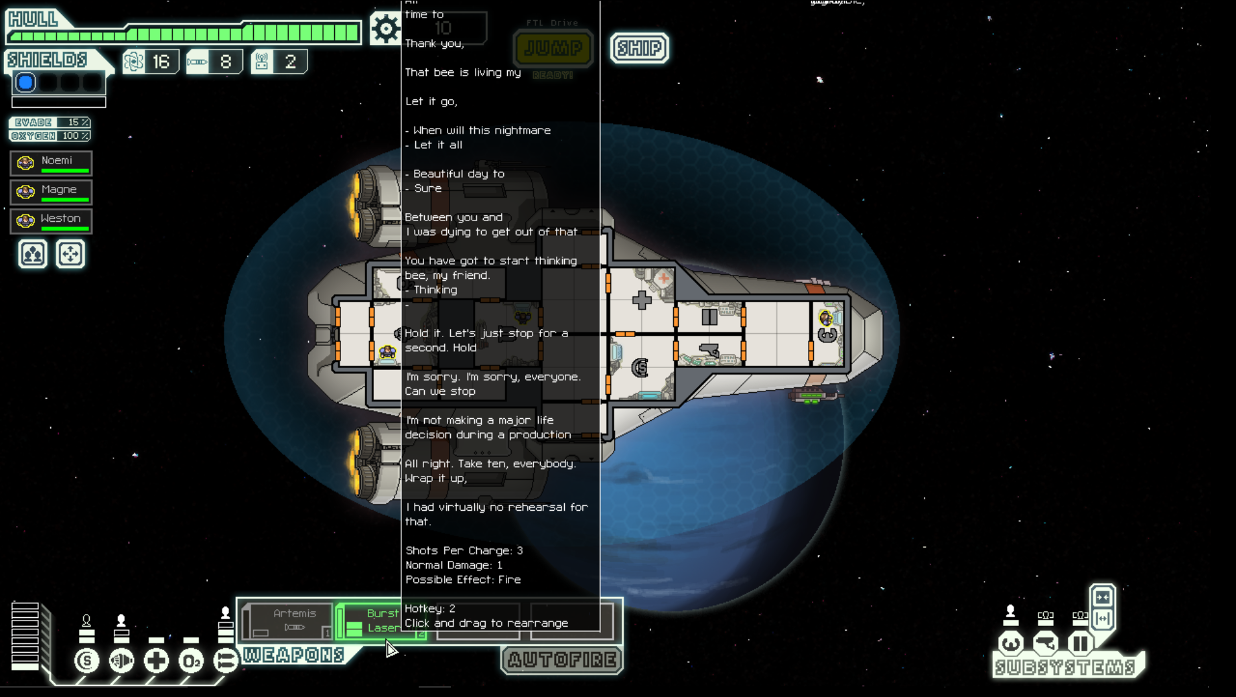 <weaponBlueprint name="LASER_BURST_3">
...
<flavorType>These are the voyages of the Starship Enterprise. a
Her five-year mission, to explore, strange new worlds. a
To seek out new life and new civilizations. a
To boldy go where no man has gone before. a
a
Double new line!</flavorType>
...
</weaponBlueprint>
resulted in this, 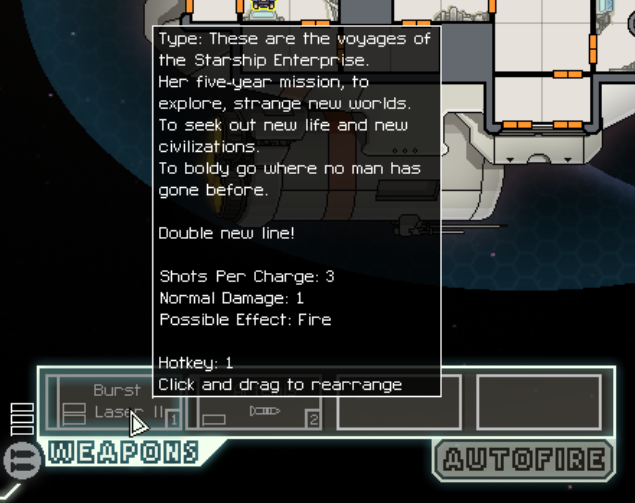 note that there's this annoying "Type:" at the beginning, but you can find the text called "type_header" in misc.xml that sets this and make it blank, resulting in this,

with the "paragraph" structure 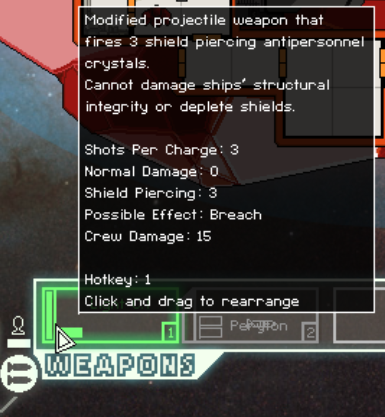 right... so then I figured that I could probably do the same thing for weapon description (<desc>), and so I was right, as follows 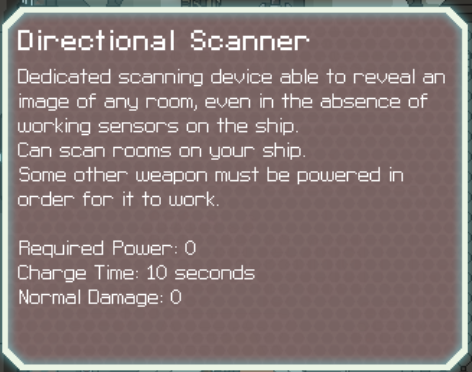 <weaponBlueprint name="SHIPRADAR">
<type>BOMB</type>
<flavorType>Scanning Device</flavorType>
<title>Directional Scanner</title>
<short>Direct. Scanner</short>
<locked>1</locked><!-- Doesn't require any power, but instead requires an active weapon to function. -->
<desc>Dedicated scanning device able to reveal an image of any room, even in the absence of working sensors on the ship. a
Can scan rooms on your ship. a
Some other weapon must be powered in order for it to work.</desc>
<!-- trimmed -->
</weaponBlueprint>
--------
so in general, adding an extra word before a forced line break (I used 'a' because it is literally the simplest thing) should let you use line breaks in flavorType and desc for both weapons and drones. of course, the space in desc is much more limited, so keep that in mind, and it should also work for augments, but there isn't really enough space there. I don't know, but I have a strong feeling this will work for text elements for events, but I haven't tested it so I can't be sure.
--------

Last but not least, I created a Python program that generates Slipstream tags to add the description of a weapon into the weapon's flavorType element, for all weapons in a given file, making use of this "paragraph" technique for each sentence. You can find the program here, on GitHub: perhaps someone will find this useful

that's how I ended up with this image

remember, just set type_header blank to get rid of the "Type:" thing, or, you can change it to something else like "Description:\n"

This is very interesting, thank you!

Users browsing this forum: No registered users and 61 guests