I have to say, for as great as this mod is and how much I love the changes, the early difficulty is simply ludicrous. This isn't a matter of me using suboptimal strategies, this is a matter of enemy ships simply having too much in early sectors, and oversaturation of content makes it very difficult for the player to keep up realistically. Drones that ignore shields and cause hull breeches are fine. 3 damage missiles are fine. Defense Drone 2s are fine. Scatter lasers are fine. Everything in this mod is fine on its own, and later on is fine combined. However, the AI should not have everything I specifically mentioned by name all at once with a mantis boarding crew and 2 layers of shields in sector 1, even in hard mode. I'm playing on endless if it matters, but after chilling in sector 1 level areas for a while and never finding weapons that deal damage only to suddenly be jumped by an auto scout with a flak, a scatter gun, and a burst laser 2 with a defense 2, an anti crew drone and an assault drone, and it turned my engines off before the fight even begins, I don't feel like I did anything wrong, or that I could have done anything different. I'm just arbitrarily killed for no reason. This is not something that happens in vanilla ftl, not in sector 1 at least, and if more work ever goes back into this mod, I hope this changes.

Also the loading screen is messed up. The load bars is off-center by like an inch from the bar it's supposed to be filling.

EDIT: To clarify, I don't mean to say sector one should be super easy, but please limit how much a sector 1 ship can have. They shouldn't have effectively 5 guns firing on me with 2 shields before I get more than whatever I started with. Either limit them to 2 shields or make it so they have a combined limit of 3 guns and drones or something.
Top

Bug : "x is now an ennemy" on FTL restart in combat

I had found a ship to train my crew, then saved + quit,
and on FTL restart I got a message saying a crewman is now an ennemy and the fleet pursuit doubled for 1 jump.
Mantis B
Better Planets and Backgrounds_v1.3.1
CE Resource Pack 1.308
FTL Captains Edition 1.308
CE BPaB Compatibility Patch 1.0
CE Additional Music Addon 1.301
Extended Pursuit Indicator x24 with numbers v.1.3 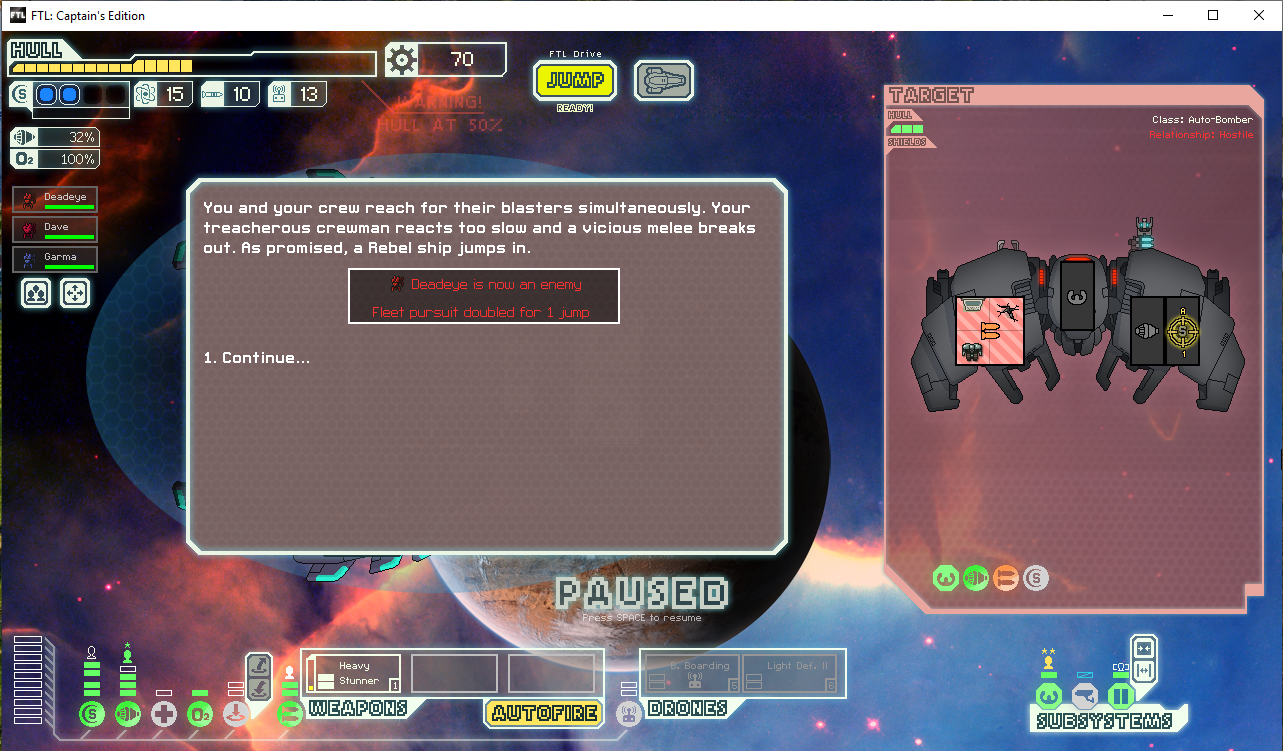 Hey Sleeper,
I've just been wondering what the drones that didn't work as intended (sad drones) and why they didn't work? Some of them look pretty cool!
Also, what is the red bomb listed under "special gear"? I don't think I've encountered it like the other three.
Thanks!
Top

Hey Sleeper, I really want to try this mod but I get a glitch where my weapons and crew are strange coloured blocks. I tried the troubleshooting step of making sure I had all of the mods in the right order, but that didn't fix it. Is there anything I'm missing? I'm using BPaB and the additional music addon. I have the compatability patch and the CE resource pack.

https://imgur.com/a/QsSNHqx is the order in slipstream.
Top

DJMAGaming wrote:I hope someone will answer... I'm new to modding, and I've been trying to get this to work for 4 days now. I've read everything on the first page, and tried the solutions. I've re-ordered the mods on the SMM list, I've re-downloaded FTL and SMM several times. I can get it to launch with the weird CE image and it never progresses. I've done everything. And each time I start it with the mods, I do the "verify Integrity" thing and I'm always missing 2 files and have to re-download them again. Someone, help... I just wanna play CE

Did you delete the backups that SMM creates?
Because you'll want to make sure the backup files are of vanilla FTL so when you upload a mod, it goes back to your backup, then compiles CE into your game.
I remember not doing that at one point so every time I restarted the game, the Rebel Fleet would be delayed by 10000 jumps and I had features from A Strange New Galaxy.

Also, after you patched CE into the game, don't go to Steam and verify the game cache integrity. That removes the mods you just put in!

Just tried doing that, and it still doesnt load it up... Just goes to the loading screen with the weird CE icon, and then an error pops up saying it took to long to load :/ at this rate i'll never play CE

Hey DJMAGaming this has nothing to do with this topic but I was hoping to get a fresh link for your custom Federation Medical Cruiser because all of yours are broken, same with the original. I hope you see this message in time.
Top

Would I be able to hopefully appropriately suggest that as long as the Flagship Randomizer is included as an option in this package, that the 26-Flagships Add-On should be as well, as located here?

The 26 Flagships are intended to be an upgrade on the Flagship Randomizer, all custom-designed for balance so you can get the random without flakiness. It was also designed with Captain's Edition in mind, though it can work with anything. I offer it as a pretty solid suggestion to go with this.

Found a small bug with the weapon modifiers: Supercharged fire beam does not in fact pierce shield, while the discription clearly states it should.
Top

Hello, I'm having a problem with the endless loot texture pack addon. I can load everything properly following the order in the wiki and the forums, and everything is installed properly by SMM, but when i get to loading the game it takes a very long time on the loading screen (the new CE one) but crashes with a Mingw assertion failed error and the message:
Assertion failed
File: src/rapidxml/rapidxml.hpp

I tried reinstalling FTL, reinstalling SMM, removing ftl.dat from the backup folder in SMM and everything i could find on the internet including using the 4Gb patch, but nothing worked. I can run the game with CE only and CE and endless loot without textures but it crashes whenever i load the texture pack. Any idea how to fix this or a version of endless loot without the texture pack and normal textures?
Top
Post Reply
6627 posts

Users browsing this forum: No registered users and 20 guests